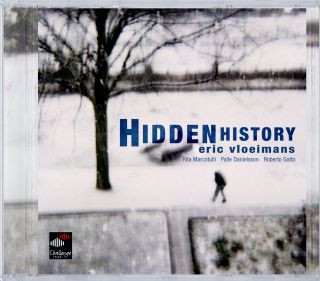 After we have heard the more experimental side of Eric Vloeimans on Brutto Gusto (CHR 70102), and his laid-back, loungy side on VoizNoiz (JJT 77009), he brings us with Hidden History a completely different album. Together with the Italian pianist Rita Marcotulli he has made a truly "sweet" album, with lovely composed melodies interwoven with Eric's always surprisingly soft sound. An album to play at the fire-place during a cold winter-day, and think back of all good memories sometimes Hidden in History.
Eric Vloeimans: Actually, the make-up of the group was clear right from the start. From the moment I heard Roberto in Rita's band I felt as if I belonged to Roberto's fan club. It was crystal clear that he, if he could and wanted to, should be in the group. The participation of Palle Danielsson was also a foregone conclusion. Rita plays more often with Palle and we are both very much taken with him. The matter was quickly settled. There was a tour in which pieces contributed by various band members were tried out and worked out, and the CD was made straight afterwards. "Hidden History" had become a fact.