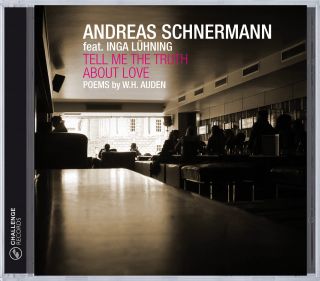 Tell Me The Truth About Love

Catalog number: CR 73254
Releasedate: 02-10-06
Inga Lühning: vocal | Matthias Bergmann: fluegelhorn |
Paul Heller: tenor sax, clarinets |Kai Brückner: guitars, dobro
Andreas Schnermann: piano | Dietmar Fuhr: double bass
Sebastian Merk: drums W. H. Auden, (1907 - 1973) wrote criticism, essays as well as drama, but above all he is known as one of the most influential English poets of the 20th century. He was born in the United Kingdom, but emigrated to the United States in 1939, becoming a U.S. citizen in 1946. His work tells about the peculiarity of everyday life and fleeting but memorable moments in a funny yet wise manner seasoned with a dash of irony. Audens remark "a poet is, before anything else, a person who is passionately in love with language" indicates the musical fitness of his poetry, that challenged composer and bandleader Schnermann to transform these complex words into music and create this wonderful jazz-album!
Anyone who saw the movie "Four Weddings and a Funeral" will recall the emotional "Funeral Blues" , the poem read by Matthew (John Hannah) at the funeral of his partner Gareth (Simon Callow). Earlier it has been set to music by classical composer Benjamin Britten, but the jazz-interpretation rendered here by Lühning is the purest blues one can imagine in a modern jazz idiom, and of similar quality is all this album and its musicians. Andreas Schnermann (b.Germany, 1968) started in his youth playing electronic organ till he switched to the piano. Studied in Bern at the Swiss Jazz School with Joe Haider and William Evans (1992-1996), consequently in New York and Canada with Barry Harris, Kenny Werner, Joe Lovano, Dave Douglas und Dave Holland a.o. With various groups he played in clubs and on festivals of the German and Swiss Jazz Scene and toured Europe with his quintet. In 2001 appeared his debut-album "4 in one" with his own quintet, followed by "welcome to my backyard" in 2003. He was twice awarded by the Art and Culture Foundation of NordRhein- Westfalen. Vocalist Inga Lühning lived and studied song in the Netherlands and USA. She came in 1998 to Cologne, joined the group "Vocaleros" with which she toured various Festivals. Simultaniously she gathered experience as a background-singer (John Lord) and as singer in TV-Shows ad Galabands, while she cooperated regularly with singer/songwriters Serge Maillard and Stephan Scheuss (Purple Schulz). She is member of the group "re:jazz" and with Christian Thomé, Mario Mammone und Helmuth Fass she founded her own Jazz-pop quartet "Lühning", which is also the title of their first CD. For a few years she taught song at the "Kölner Offene Jazz Haus Schule".