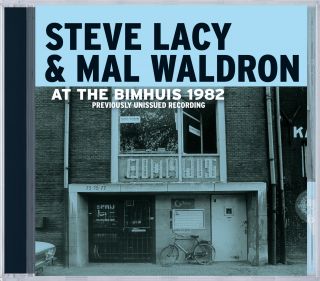 Catalog number: DBCHR 75249
Releasedate: 06-03-06
The Bimhuis in Amsterdam is a special place in the world of modern jazz. It's known as the home of Dutch jazz masters like Han Bennink, Misha Mengelberg and Willem Breuker, but of course many other musicians from around the world have played there as well. For many of them, it's been the starting point for extended European tours. The music of saxophonist Steve Lacy and pianist Mal Waldron fit very, very well in the Bimhuis over the years. The music on this CD confirms that. True, many great recordings by this duo have appeared on CD, but till now none was made in that magic place called the Bimhuis. The place affects the music, and having Waldron and Lacy play their music in Amsterdam was something truly special. Lacy's 'Blues for Aïda' is heard here in its earliest recorded version, and his strong soprano solo gives it an edge over the several other recordings. Waldron's piece 'Snake Out' always contains surprises, and this 1982 rendition is no exception. Here the pianist does some 'way cool instant composing' in the middle section. Not only does he outrun his musical partner, he even invents a completely new chord progression on the spot, before returning to the familiar theme! And we can hear Lacy point his horn inside the grand piano at times, as Waldron lays out, pedal down, to enjoy the reverberant sounds. Bearing in mind that these archival recordings stem from the period when music was still pressed on vinyl, it's tempting to picture the set of three Thelonious Monk tunes here as comprising Side Two of a Waldron & Lacy LP. On 'Reflections,' Waldron takes full advantage of the rich and warm sounds of the Bimhuis's grand piano. Mainly due to Lacy's omission of the intro, this version of ''Round Midnight' is relatively short, compared to their well-known take recorded at Le Dreher in Paris in 1981. But the last song of this set, 'Epistrophy,' makes up for that lost time, with extra blowing room, and Lacy in a strikingly mellow mood. There is a strong Dutch connection to Lacy and this material, by the way. On the second side of the 1982 album Regeneration, Steve Lacy is heard playing Monk tunes with Bennink and Mengelberg, and Lacy later toured with Misha's ICP Orchestra, as heard on the album Two Profiles - The ICP Orchestra Performs Nichols/Monk. Both Steve Lacy and Mal Waldron have now left this world, and the original Bimhuis is also gone. Sadly, Waldron and Lacy didn't live long enough to play the new and improved place which opened in 2005. So consider this CD not only a tribute to one of the greatest duos in jazz history, but also as a farewell to the cold and uncomfortable steel seats of the old Bimhuis.