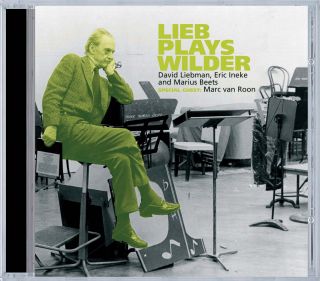 Catalog number: DBCHR 75214
Releasedate: 11-04-05
David liebman: Tenor and Soprano Saxophone / Flute
Marius Beets: Bass
Eric Ineke: Drums
Marc van Roon: Piano His sound on the soprano saxophone and the intensity of his playing are highly recognizable. Dave Liebman worked with Miles Davis, Chick Corea, Elvin Jones and many others but his own oeuvre is also quite impressive and voluminous. Liebman about 'Lieb Plays Wilder':
' Alec Wilder was an extraordinary artist of the 20th century, a composer of classical and pop music as well as a cogent writer concerning music. I have recommended his book in a past newsletter,” The American Popular Song 1900-1950” as a fantastic review from a musical perspective of the Broadway and movie music which constitutes the American song book. As a dedication to him, I recorded a trio record with bassist Marius Beets and one of the most swinging drummers around, Eric Ineke, both of whom live in Holland. It is straight ahead jazz playing a varied repertoire of an important composer of our time. Available on the Daybreak label.'