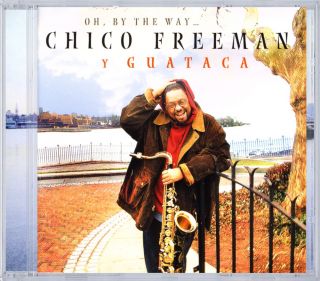 Oh, By The Way

Catalog number: DMCHR 71027
Releasedate: 01-01-01
The record starts with the funky, percussion-accented „Rhythm of the Cane“ and prepares the listener for a journey, which takes him through a shimmering world of different sounds, but without leaving him lost in their midst. The connecting link is not the least the unmistakable sound of Chico’s saxophone (but who also contributes keyboard sounds and samples at times!). „New African Village“ is still funky, but with a clearly jazzy sound. „Mambo Rap“ is then Akil Dasan’s first contribution, a fantastic mixture of Cuban grooves and daring vocals, the spirit of Manhattan packed into 3½ minutes. „Guitar“ deals with experiences in Spain and the memory of the music from „Carmen“. The following „La Luna“ is even reduced to a beautiful saxophone-guitar duet. „El Mensaje“ leads us back across the ocean, takes up Cuban idioms and spices things up with a pinch of funk. Back in the city: „Business as usual“ is proof (as if it were needed) of the compatibility between hip-hop and jazz. The ingenious putting to rhythms of the texts by Akil Dasan is accompanied and ”interpreted” terrifically by Chico und Romero. „Once again“ is another track with accented percussion, whose melody lead by saxophone and guitar in unison has the stuff to become a standard. „541“ is named after the room number in which Chico taught improvisation at the New School and is characterized by surprising changes of tempo and intriguing handling of melody. „La Marqueta“ brings the lively ambience of a marketplace in Manhattan’s Spanish Harlem into our homes, while the old town of San Juan on Puerto Rico is honored in „Viejo San Juan“ (composer: Andrew Monroe-Trice). The closing song is a successful bonus mix of the already heard „Business As Usual“, this time with a clearly less ”acoustic” character than in its first version.
Oh, by the way: you really shouldn’t miss this album.