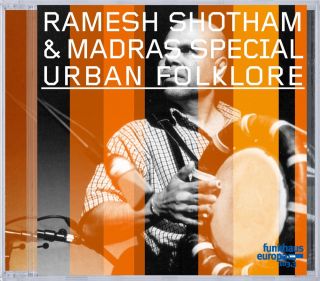 Catalog number: DMCHR 71503
Releasedate: 24-10-05
Ramesh Shotham was born in Madras, southern India. He started his music career as a drummer in a 50s rock band, with which he traveled through the Indian subcontinent a few years. Then he returned to Madras to study Tavil, a traditional temple music drum, which is played everywhere in southern India and Sri Lanka. Later, he studied classical percussion instruments at the "Karnataka College of Percussion" in Bangalore under the guidance of master drummer T.A.S. Mani. He came to Europe with “Sangam”, an Indo-jazz fusion band, in 1980. Ramesh has lived and worked in Europe since that time and is recognized as one of the most successful percussionists. He not only has worked with leading European and American jazz and rock musicians, but also with artists from Africa, Australia, China, Korea and various Arabian countries. He was a visiting instructor at Bayreuth University and at the Conservatory in Rotterdam, where he held workshops and seminars. Ramesh Shotham has played at numerous international festivals: Berlin Jazz Festival, North Sea Jazz Festival, Umbria Jazz Festival, Montreal Jazz Festival, Buk Festival Korea and many more. He has worked with musicians such as Carla Bley, Steve Coleman, Rabih Abou-Khalil, Jonas Hellborg, Steve Swallow, Charlie Mariano – to name just a few. He is also a permanent member of Sigi Schwab's Percussion Orchestra.