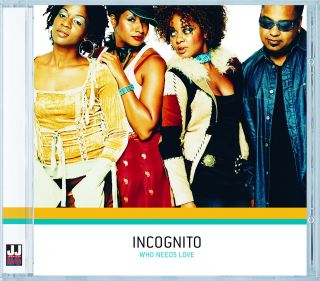 Catalog number: JJT 77022
Releasedate: 28-03-03
After eight great albums and many successful productions, with a.o. Chaka Khan and George Benson, Bluey finally presents a new Incognito album: Who Needs Love. Here we have a collection of thirteen passionately crafted songs and instrumentals, with the unmistakable sound of Incognito (a mix of jazz, soul & funk) and fantastic contributions of the Brazilian musical genius of Ed Motta and Britain's most enigmatic songwriter/producer Paul Weller. US featured vocalist Kelli Sae from New York is joined by joy Rose and former Incognito vocalist joy Malcolm returns to the line-up. Who Needs Love is a musical journey that showcases the band's seventies roots, documenting their steps along the way through the eighties and nineties. Most importantly it shows how refreshing their sound is in a sea of imitators in the year 2003.In a world of manufactured bands and a commercially driven music industry where creativity and individuality are rare, Incognito continue to take their soulful blend of jazz and funk across the globe. Not many people know that Incognito was founded more than 20 years ago! In the early'80's Jean-Paul 'Bluey' Maunick and Paul 'Tubbs' Williams started a musical project called Incognito. But it wasn't until 1991,when they established their international career with the release of the album 'Inside Life' on the famous English acid jazz label Talkin' Loud. This album featured a cover of Always there, originally made by Ronnie Laws. With Jocelyn Brown on vocals, this song came to be their biggest hit ever, being a club classic in its own time. Many hits followed, such as Stevie Wonder's Don't You Worry 'Bout A Thing and Still A Friend Of Mine. In 1993 Incognito had their definitive breakthrough in the USA, selling over 350.000 copies of their third album Positively'. Many successful releases hit the album-charts all around the world and many international tours followed.