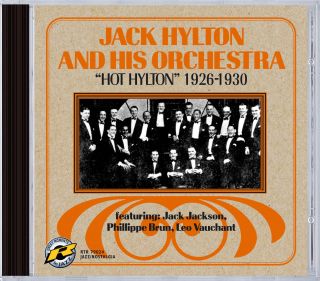 Jack Hylton and his Orchestra

Catalog number: RTR 79024
Releasedate: 21-11-05
First release in 2000.
Leader of Brittain's first and most famous show-band from 1920 to 1940. Jack Hylton was world renowned as England's answer to "King of Jazz" Paul Whiteman, literally the most famous band in the world through the '20's and '30's until the arrival of swing in the mid-decade. Like that of Whiteman, Hylton's was an all-purpose orchestra that could and did play everything, from dance music to concert arrangements of light classics. Jazz was just one of the flavourings that Hylton used, but he used it to very good effect. This CD could surprise a lot of people who have never really listened to that portion of his huge output. In trumpeters Jack Jackson and Phillipe Brun he had two outstanding jazz soloists and the likes of trombonist Lou Davis and multi-reeds player E.O. "Poggy" Pogson are well worth a hearing. Among the more obvious "Tiger Rags" and "Limehouse Blues", try the German made "Herr Lehmann, Herr Lehmann, was macht die Frau gemallen in Marienbad" This has been a Retrieval surprise best-seller.

"...some superb arranging - some of these tracks are rare indeed... Those unfamiliar with the British Dance band scene are in for a surprise! Recommended."
Vintage Jazz Mart