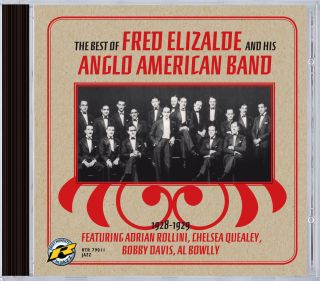 The best of Fred Elizalde and his Anglo American Band

Catalog number: RTR 79011
Releasedate: 26-12-12
First release in 1997.
In 1928 pianist Fred Elizalde, Filipino born scion of a wealthy and prominent family of Spanish descent, made musical history when on the strength of some modernistic recordings, a few with a band of amateurs from Cambridge University and a few more with British studio musicians, he was invited at, the age of 22, to form a resident dance orchestra to play at London’s exclusive Savoy Hotel. Though primarily intended to be a dance band Elizalde, a devote of “hot” music, ensured it’s jazz interest not merely by the careful selection of some of the finest British exponents of the art, but by importing from the USA several prominent members of the famous California Ramblers, including trumpeter Chelsea Quealey alto saxist Bobby Davis and the highly regarded Adrian Rollini, master of the bass saxophone and several other instruments such as the xylophone, piano and drums plus his own inventions, the goofus and the hot fountain pen. Elizalde also obtained a lucrative recording contract which not only had him record conventional dance music of the time but also to feature a smaller jazz group billed as “Fred Elizalde’s Hot Combination” During 1928-1929 these records, in the fashionable white New Yorker style, caused a sensation amongst British musicians and jazz lovers. We have listened to the complete Elizalde ouvre and chosen the cream of their output for this CD. The 78’s, never issued in the USA, are much sought after among collectors and it is many years since they were available, in not very good transfers, on LP. John R.T. Davis has worked his customary magic and the sound quality here is state of the art. As a footnote, it is interesting to note that in the early 1930s Elizalde forsook jazz to become (as Federico Elizalde) a prominent composer and conductor of classical music before his death in the 1980s. It should also be mentioned that Al Bowlly, the South African born singer, who since his death in the London ‘Blitz’ during World War 2 has become the object of a world wide cult, makes several appearances here.