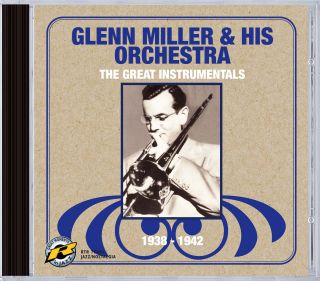 Catalog number: RTR 79001
Releasedate: 21-11-05
One of the most commercially successful bands of all time, Miller's music, still evokes enormous nostalgia for the heady days, just preceding, and during World War II. Glenn's mysterious and tragic death only added to the legend and a smash-hit film of his (rather fictionalised) life story starring James Stewart and June Allyson revived the legend for a much later generation. Miller never claimed to run an all-out swing band - this was first and foremost a dance orchestra with one of the most distinctive styles in history - a style that worked equally well for romantic ballads and for swing numbers. As a result (and also partially because this was an arranger's rather than a soloist's band) it has been seriously under-valued by jazz critics. This collection of overtly 'hot' swing instrumentals will prove to anyone with open ears that this was a band that could swing with the best. If you don't believe us, try "Bugle Call Rag", or if it's memorable solos you want, how about Bobby Hackett's little comet gem on "A String of Pearls"