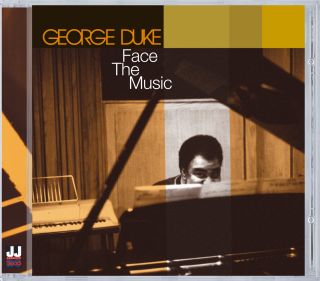 Although well-known as a former bandmember of Frank Zappa, here's a musician with an endless / various repertoire, but also made fame with becoming a well-known producer for many contemporary jazz artists (Singer Rachel Ferrel debuted with two albums produced by George). He is also still a great live performer playing frequently at various festivals like the Montreux Jazz Festival and the North Sea Jazz Festival. George Duke is considered one of the most acclaimed jazz / contemporary jazz pianists of our time and he presents his new album. 'Face The Music' is George's first new release on his own label: BPM (Big Piano Music), which is exclusively licensed by JJ-Tracks for distribution in Europe. While it is predominantly an instrumental album, vocals are spread throughout. The album is a reflection of his diverse musical world: 'The Black Messiah' is a tribute to Cannonball Adderley and getting the sound & feel of those original Cannonball live sessions with people screaming and shouting in the background. Totally different is the R&B track 'Close to you' featuring George on vocals! Besides laidback chill grooves, there are also uptempo tracks like 'Ain't It Funky Now', 'Another Way To Look At It' en 'Creepin'with George's distinctive funk & fusion sound. Face The Music' represents George Duke at his best: Jazz, Fusion, R&B and Funk!