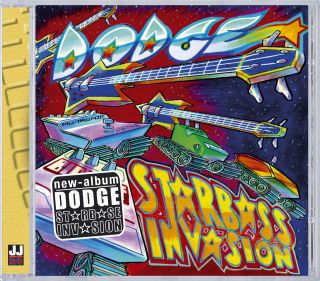 Catalog number: JJT 77023
Releasedate: 26-12-12
Dodge, thé funk bass-player of The Netherlands, is famous for his participation in the Dutch funk/jazz/hip-hop formation Seven Eleven: this band's live reputation is well known in various countries. In 2002 Dodge & Seven Eleven joined forces with thé Bride Of Funkenstein Dawn Silva. Their concert was one of the funkiest highlights of the North Sea Jazz Festival. For his own projects Dodge decided to put a magnification glass on his part of the funk. Dodge's preference is clear: star bass, lots of bass effects, funky slappin' and spankin'. But his way of playing is in many ways very much different from his first source of inspiration: Bootsy Collins, sometimes even taking it a step further.
On his two albums Dodge's friends from Seven Eleven are all over the place to back him up. And for his new album 'Star Bass Invasion', Dodge invited some specialists from the USA: Jara Harris from Slapbak, Nowell Haskins from Funk-kin, and funkmeister Menace joined the lines. Straight from the mothership comes Bootsy Collins playing guitar with Dodge on the bass on Kush Griffith's 'On The Hood'.