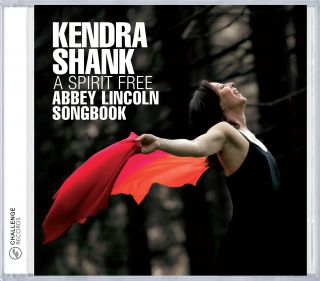 Abbey's fabled career is too well documented to require much rehearsal here: she has been a jazz singer for half a century (Abbey Lincoln's Affair appeared in 1956), a film star, and a powerful voice for civility and civil rights. Yet not until the 1990s did she begin to receive recognition as an outstanding songwriter, words and music. A Spirit Free is the first album by another singer devoted exclusively to the Abbey Lincoln songbook. It won't be the last, but it will remain the standard by which its successors are measured.
Kendra broached the idea for the album in March 2002, after Abbey's magnificent triptych of concerts at Lincoln Center. Those performances served to display the diversity and ingenuity of her catalog while throwing down a gauntlet to those who would explore it. Whatever qualms Kendra had were allayed when she asked permission of Abbey, who pointed out that nothing is more "valedictory" for a composer than for others to perform her songs. (Gary Giddins, liner notes)

Recognized as "one of the top jazz singers around today" (Scott Yanow, L.A. Jazz Scene), Kendra Shank's warm voice and subtle improvising style have drawn enthusiastic response from fans and the media. Her adventurous, genre-bending approach is influenced in part by her early roots as a folk singer-guitarist, a residency in Paris, and studies with pioneering vocalist Jay Clayton. Shank's critically-acclaimed debut CD, Afterglow (Mapleshade, 1994), was co-produced by jazz legend Shirley Horn. This was followed by Wish (Jazz Focus, 1998), which charted on jazz radio, was named "Top 10 of the Year" in Jazziz magazine, and put Ms. Shank among "Talent Deserving Wider Recognition" in the Down Beat International Critics Poll. In 1999 Shank formed her current New York ensemble and featured them on her radio-charting CD Reflections (Jazz Focus, 2000) which made "Top 10 of the Year" lists in The Boston Globe and Newsday. This ensemble is also featured on her current release, A Spirit Free: Abbey Lincoln Songbook (Challenge Records, 2007). Shank has appeared on NPR's JazzSet and Marian McPartland's Piano Jazz and performs internationally in clubs and festivals. She was guest guitarist on Abbey Lincoln's CD Over The Years (Verve, 2000) and has been a vocal guest with Bob Dorough, Jay Clayton, and Peter Leitch.