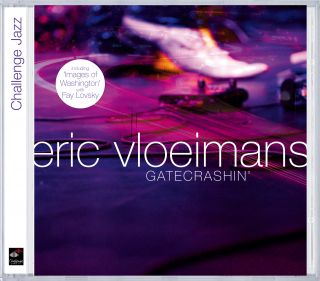 This CD has a different character to previous CD’s by Eric Vloeimans, though those differ a lot among themselves.
In early 2006 Eric together with Jeroen van Vliet accompanied dancer Connie Janssen for some 40 performances from Rotterdam to Moscow. During this project he decided to make the step into the world of electronic music, enabling him to develop new sounds and explore new possibilities. Thus he formed his new group “Gatecrash”. Of course with Jeroen on keyboards, with the wonderful Icelandic bassist Gudmundsson and inventive drummer van Hulten.

The band spent a week on his old farm in France where new pieces were transformed into material for this CD. Eric asked Fay Lovsky to write lyrics to an unfinished song, and sing it as well, so his first pop song was born: “Images Of Washington”.
To really do justice to the dynamics and power of the band, the CD was recorded live at the Lantaren/Venster theatre in Rotterdam on December 2, 2006.

Eric Vloeimans (1963) studied jazz- and classical trumpet at the Rotterdams Conservatorium and graduated with honours in 1988, leading him to the New School in New York. There he performed with a.o. the Frank Foster and Mercer Ellington bands. Since 1989 Eric has been active in a wide variety of ensembles.
His first CD's - "No Realistics"(1992), "First Floor" and "Bestiarium" - were praised for the music's expressive power, earning the Eric Vloeimans Quartet a reputation as one of Holland 's top bands. In addition Vloeimans' performances with a multitude of other formations had drawn international attention to his versatility. By now he played with the most reputable and established musicians on the scene.
On his CD 's Eric prefers to record original compositions and does not feel restricted to one particular style. His writing is fresh and creative, with feeling and respect for tradition but never pretentious.
In 1999 he received an Edison Award for "Bitches and Fairy Tales" and was nominated for the prestigious Bird Award at the North Sea Jazz Festival in 2000.
In 2002 his whole oeuvre was awarded with the most important jazz prize in The Netherlands, The Boy Edgar Prize.