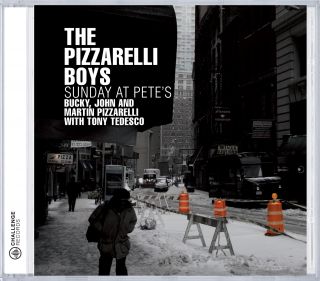 Catalog number: CR 73259
Releasedate: 10-09-07
This is a CD that had to be made. It represents many years of listening and learning and also, the genesis of music for the Pizzarelli family.
The music you will hear on this disc comes from a number of distinct sources. The first, and most important, is my father’s Uncles, Peter and Bobby Domenick. They were terrific musicians who played both tenor banjo and guitar.
My father’s first musical lessons where held at Peter’s house after school on a weekly, and sometimes daily basis. As he grew older, my Dad would participate in the Sunday post-dinner sing alongs that were held at Pete’s house. I remember him telling me that he knew three chords. He would start on the first chord and when Pete nodded his head Bucky would switch to the second. When Pete nodded again he’s switch to the third. If there was another nod, my father would drop his pick!
I have gotten to record with my father on many occasions, but it was my brother, bassist Martin, who said this CD was the first of the three of us playing together without an entire band behind us.
With Martin’s comment in mind and the reminder of family always there, I set out to pick songs for this CD that came from our earliest musical remembrances-Sunday’s at Uncle Pete’s house. After dinner jam session’s and sing alongs that featured the music of the beginning of the 20th century-Alabamy Bound, Bye Bye Blues, Whispering, Sweet Sue and Yes Sir, That’s My Baby, to name a few. These were also some of the first songs I learned in my tenor banjo lessons with Uncle Bobby when I was 7 years old. The lone exceptions would be “You’re My Girl”, an early Frank Sinatra hit that was a favorite of my mother’s and “Night on Garrett Mountain”, a blues named after a favorite spot of my father’s in Paterson, NJ, his hometown.