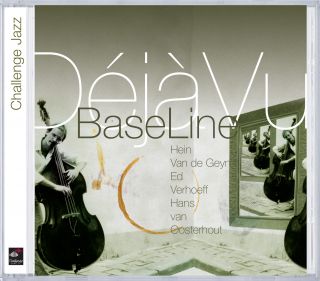 Catalog number: CHR 70067
Releasedate: 01-09-07
For me it was great to record this music, to be in touch and inspired by the music that formed my taste, my way of musical feeling. At home I have a copy with all these fragments of 70’s music interweaving with the sounds of today. It’s too bad that due to copyright laws (rightly
so, don’t get me wrong) we were not able to give you this complete impression, but in 50 years we are hopefully able to bring this music out as we expierienced it in the studio.
(from the liner notes by Hein van de Geyn)

Inspired by pop and jazz music from the vinyl era

In 1994 I decided to create my own group. I had written many tunes over the years, and felt a need to express myself as a band leader, playing my music, having the bass, that beautiful expressive instrument, stand more in the front. I decided to rekindle the connection with John Abercrombie and asked drummer Joe LaBarbera to join the trio. Baseline was born, but in this shape proved to be too difficult to maintain.
The day of the recording of a new Baseline album came, and I had no idea..... The band with John Abercrombie and Joe LaBarbera had been magnificent. Strong individual mature players, serving the music, but also strong in their own colour. I couldn’t just go on like that. This
was a different band altogether. Ed, who I have known for ten years, is becoming this strong melodic player that finds his own way between all stylistic influences. There is Jazz, there is Fusion, there is some Brazil ..... Hans and I go back to the days of Jack van Poll, those days where Jack would light a place with his sheer sense of swing. Those were the days, some 15 years ago. But Hans and I kept playing and loving to play together. We are a tandem now in the bands of Philip Catherine, Enrico Pieranunzi, Toots Thielemans, Bert van den Brink and some other leaders on a more irregular basis.
Once in the studio, an excerpt of one of the old vinyl records I grew up with was put on tape and served thus as a inspirational point of departure, giving us a tempo, a mood, sometimes a contrast. It changed the atmosphere.
E.g.: For the title-song “Déjà Vu” I looped that great guitar groove of the intro with the same name by David Crosby on the wonderful album by Crosby-Stills- Nash&Young and we used this underneath the whole tune, switching grooves from 12/8 to a 3/4.
(adapted from the liner notes by Hein van de Geyn)

HEIN VAN DE GEYN (1956) studied classical violin for 15 years, playing pop and blues on guitar, and changed to bass-guitar in. his late teens. Soon Hein played in dixieland-bands, but with his self formed bebop group he got awarded "best soloist" on the 1977 Laren Jazz festival. This made him pick up the double bass, and start a career as jazz musician. In 1980 Hein moved to the USA, played and recorded with many great musicians and in 1983 returned to Europe to become one of the most sought after bass players. In 1990 Hein made the first album under his own name, a duo with Lee Konitz. Hein toured and recorded with Philip Catherine, Chet Baker and many years with Dee Dee Bridgewater until he decided in 1996 to pursue his own career as a leader and a bass-teacher. On some 80 records his name can be found as composer, arranger or solo bass player. In 1994 he created his group BASELINE with John Abercrombie and Joe LaBarbara and co-founded with Anne de Jong and Joost Leijen the Jazz label CHALLENGE JAZZ , for which he is still producing a growing number of successful recordings. He received the Bird Award and the prestigious Prins Bernhard Fonds Music Prize (for the stimulation of young musicians and his merit for European Jazz in general) and was elected as "Best European Acoustic Bass Player".