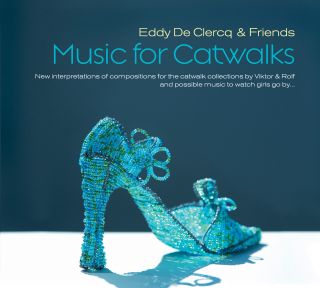 Catalog number: ST 75744
Releasedate: 02-11-07
‘Music for Catwalks’: Watching Girls Go By…
‘Music for Catwalks’ is not a compilation, nor a mixed CD. All tracks on it are original compositions, especially created and recorded for a fashion show. This is meant to be a creative interface between music and fashion and a starting point of the collaboration between Dutch fashion designers Viktor & Rolf and their musical director and producer, Eddy De Clercq. Since the very first Couture show in 1998, in the Thaddeus Gallery in Paris both parties have been working closely together on the music to suit Viktor & Rolf’s collections. According to the designer’s idea these soundtracks for their shows should breathe a mood of their own and had to be creations which fitted their collections like a glove. This way the shows became a true and unique cooperation between the designers and the composer.

On ‘Music for Catwalks’ one finds a selection of compositions as used during the actual shows by Viktor & Rolf and reworked by Eddy De Clercq into new arrangements for listening pleasure outside the environment of the actual fashion show. Other compositions on this album were made for possible shows or simply were inspired by the wonderful world of fashion.
The music on the CD 'music for catwalks' is an eclectic mix of various styles; jazzy pop, latin soul jazz, bossa nova, balkan grooves, jazz, French chanson, Cuban grooves and atmosferic collages.
It is a bold step forward for the team of Eddy De Clercq & Friends - a real departure from the past! The group is clearly inspired by older Brazilian tunes, but they've also opened their groove up to a much more global horizon - taking on influences from African and Cuban sources, and working in a style that has a much more organic feel overall.Sue Moreno, Vocal | Milenko Stanisic, Piano | Zorko Opacic, Guitar | Rhythm programming & arrangements
by Eddy De Clercq & Zorko Opacic