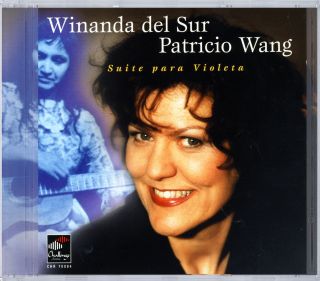 The CD is a vivid musical experience of modern compositions and arrangements by Patricio Wang of the songs of Violeta Parra, including Parra's most famous song “Gracias a la Vida”. Winanda van Vliet offers her own personal passion and approach to these “classics” of the Chilean and Latin American 'new song' tradition.Patricio Wang is the musical director of legendary Chilean group Quilapayún, one of the foremost groups of the Chilean 'new song’ movement. He is also very active in modern Dutch music as both a composer and performer, and regularly tours around the world with many different groups. He has composed music for film and television and is in great demand as an arranger. Winanda van Vliet is a Dutch singer of great versatility with a command of many different music styles, ranging from music theatre to modern music, from jazz to pop, chanson to soul. Her work includes productions of TAMAM , the Oom Maw Maw , the RO Theatre etc. Her interpretations of Latin American music have been praised by various distinguished musicians including the late maestro of 'new tango' Astor Piazzolla Argentine 'new song' interpreter Mercedes Sosa.

Luna y Mar (Moon and Sea), the last tour of the Winanda del Sur ensemble, enjoyed great success in Dutch theatres and the CD sold well. They recently made their first tour of Chile where their concerts were highly praised.