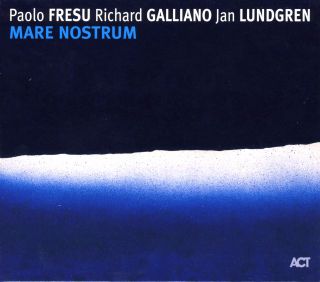 Can we consider it a coincidence, that Paolo Fresu from Sardinia, Richard Galliano, raised in the southern France but of Italian offspring and Jan Lundgren of Swedish origin found each other? Certainly not, and in spite of the unusual and quite daring line-up, this collaboration of the three most melodically inclined musicians of today’s European jazz scene has grown and developed organically.

Yet, life within the world of jazz frequently leads to coincidental encounters such as the one by Lundgren with Galliano on stage of a festival somewhere in Japan. Both musicians joined an electrifying jam session, which led to enormous mutual appreciation. The regular drummer of Jan Lundgren’s trio is also a member of one of trumpeter Paolo Fresu’s many bands, so it is not all that difficult to imagine, that sooner or later they would focus upon each other's work. It seems however rather miraculous, that those usually very busy music stars would engage in a completely new musical enterprise. It appears to have been a true temptation for these continental music masters, to enter such a daring collaboration, and form this unusual trio.

Paolo Fresu (1961) originating from Sardinia, Italy, is an untameable poet of sound. The artist’s work, deeply rooted in the cultural life of his native Sardinia, his many international awards, innumerable recordings both under his own name and as featured guest signify the fascinating characteristics of this artist. Fresu is convinced that jazz must open itself to other musical cultures. This newly found collaboration with Galliano and Lundgren points in exactly this direction and gives ample proof of the artist’s limitless curiosity, still apparent after a career of hitherto 25 years.

Originality is accordion virtuoso Richard Galliano’s (1950) greatest asset. Early on, he realized that only through recognition and assimilation of one’s roots the artist’s character will ultimately be formed and allow him to aspire and finally ascend to the highest level of musicianship. Much has been written about Galliano’s encounters and friendship with Astor Piazzolla. Yet, to artificially shorten his career by calling him Piazzolla’s heir cannot be justified. Like few others, Galliano has much rather succeeded in mixing various musical languages into one idiom, very personal, entirely European but as close to jazz as to his Mediterranean musical origin. He was able to lift his usually rather bemused musical instrument, the accordion, as well as its smaller brother, the bandoneon, out of the depth of popular music high up to the polychrome of the classic symphony orchestra, helping the instrument to gain a deservedly much higher status and unexpected splendour.

Swedish pianist Jan Lundgren (1966) has so far been able to establish himself firmly in the same league as his excellent and innovative Scandinavian forerunners, pianists like Jan Johansson and as of late, Bobo Stenson. His articulation is strong and clear, his phrasing impeccable and his timing and touch is of highest calibre. His fluid executions are exciting yet relaxed, leaving much room for contrasting improvisations, keeping the listeners attention but at the same time letting him breathe freely. His musical range encompasses contemporary influences of classical music, traditional Swedish folksongs as well as an extended jazz vocabulary. In the beginning of his career, the pianist played with many jazz greats such as Johnny Griffin, Benny Golson or Herb Geller, but is now more and more concentrating on his own roots, clearly audible in his compositions.

Fresu, Galliano and Lundgren move within a great variety of modes of expression. Considering the fact, that the future of jazz can only be kept alive by opening it towards other musical cultures, the trio acts accordingly and presents a surprising amount of themes of very varied origins. The French touch is featured through an immortal tune by the great Charles Trénet. Swedish folksongs, Maurice Ravel's 20th century stylistics, Brazilian standards by Tom Jobim and Vinícius de Moraes as well as originals culminate in a fascinating sound experience. Thanks to the remarkable musicianship of these three outstanding instrumentalists, the trio appears most capable of creating a fascinating whole, which – listened to from afar – seems difficult to obtain. This is the jazz with a contemporary tinge that provides a taste of the future: exciting, highly emotional and full of daringly creative artistic exchange. Thus, it aims at an audience interested in getting involved in its melodically intense projection