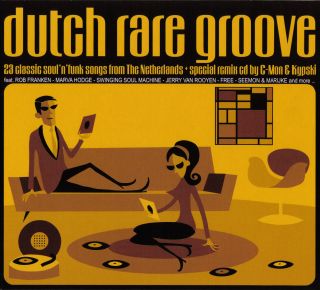 Rare Groove is a beloved term for funk lovers and hip-hop producers. This style of music is introduced by dj's to name the obscure jazz/funk from back in the days. Most of the Rare Groove productions were originated in America and at a later stage in England, the Sovjet Communist countries and even in Austria! It is time to make an inventory of the Dutch sources. That is a piece of cake for funkspecialist Sjeng Stokkink and the members of Black Market Audio. Final result: In collaboration with Fonos.nl, Supertracks releases the double cd Dutch Rare Groove on October 28th 2005.

CD 1 includes phat forgotten funkbreaks from the Netherlands. Hear the lovely grooves of the first Dutch funkgroup 'Houseband' and to 'Rob Franken', the first Dutchman who played the Fender Rhodes. Even Herman Brood is in on it! In short: surprising phat funk tracks which create a source for "new" samples.

CD 2 was given the title 'Dutch Rare Food' and includes new remixes of C-Mon & Kypski. They gave, an interpretation of the songs in their own unique way. For this purpose they used samples from cd 1 and worked close together with Pete Philly, Paradox (Illicit), Colin Benders (trompetplayer of Relax), singer U-Gene and they made a remake with the one and only Oscar Harris.