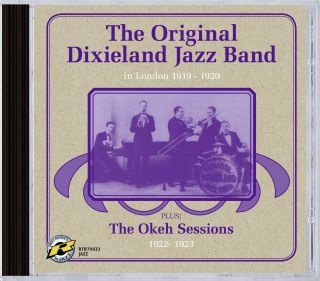 Catalog number: RTR 79033
Releasedate: 07-03-11
The ODJB were a unique 5 piece band that made the first jazz records in 1917. Two years later they were the first band to bring jazz to England, where they had a huge succes! Whilst in England they recorded 17 sides for Columbia. Because they had a longer playing time, plus the superior Columbia recording quality, many regard these recordings as the best ever recordings by the band. The complete set are on this CD and as a bonus we have the four very rare tracks they recorded on OKEH Records in 1922! This CD is of great historical as well as musical interest.
The story of the Original Dixieland jazz Band has been told in detail by H. 0. Brunn in a book published by the Louisiana University Press in 1960 : of its leader Dominick James "Nick" LaRocca and his fellow New Orleanians and their meteoric rise to fame after the promoter Harry James heard them, booked them into Schiller's Cafe' and later the Hotel Normandy in Chicago,There they were heard by no less a popular personality than Al Jolson, who on his return to New York, persuaded a prominent theatrical agent, Max Hart, to go to Chicago and hear them, and as a result the band was placed in Reisenweber's Restaurant in NewYork for a two-week try-out, starting on January 15, 1917. Within six weeks, they were the talk of the town, and had made their first records. The band sailed for England on the RMS Adriatic on March 22, 1919, ready to electrify a London audience as they had NewYork a little more than two years earlier.