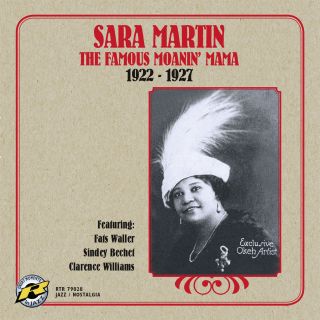 Considering the facts that she was a popular theatre performer on the black circuits for some 20 or so years and a major recording artist from 1922-1928, remarkably little seems to be known about Sara Martin and she has also been largely neglected by writers on blues topics. Her records (with one or two exceptions) have also been overlooked in re-issue programmes and we believe that this is the first CD devoted to her work.

She was born Sara Dunn, daughter of William and Katie Dunn, probably in Louisville, certainly in Kentucky, on 18th June 1884. Where the name Martin came from is not known (she was married to a banjoist named William Myers). It is said that she was working in Vaudeville whilst still a teenager and that by 1915 she was in Chicago. What is sure is that by the time that Okeh talent scout Clarence Williams signed her for recording in the autumn of 1922 she was singing in cabarets, clubs, and theatres in New York. Her first record was the popular “Sugar Blues” accompanied by Williams on piano, taking the place of Fats Waller who failed to show up for the session.

Throughout the 20’s she was a big attraction, touring for the TOBA theatre circuit and appearing in several shows at Harlem’s Lafayette and Lincoln Theaters. Besides her New York appearances she was also in shows in Detroit, Pittsburgh, Indianapolis and more exotic locales such as Puerto Rico, Cuba and Jamaica. Occasionally she did a family act with her husband and infant son.
Her only Broadway appearance was in Clarence Williams’ “Bottomland”, starring his wife Eva Taylor, but it was a quick failure. Many years later Eva remembered her as a nice person who appeared on stage in beautiful gowns and had a dramatic style of putting over a song. For a time she was billed as “The Colored Sophie Tucker” and her full-throated attack on the more Vaudeville styled numbers does indeed bear some resemblance to that of the wonderful “Last of the Red Hot Mamas”. Okeh Records promoted her as “The Famous Moanin’ Mama”, though that title was not all that accurate. Probably it was their attempt to counter Columbia’s “Queen Of The Moaners”, Clara Smith (see Retrieval 79030). On many of her recordings she was accompanied by a “jug” band which gave a country blues flavour to contrast with her essentially urban style. Her repertoire was varied, ranging from traditional style 12 bar blues to comedy duets with Clarence Williams, reminiscent of Butterbeans and Susie, to more or less straight “pop” songs and a proportion of double entendre cabaret numbers. On all she displayed a full clear toned voice and excellent diction, no doubt the legacy of her years in Vaudeville.

Sara remained with Okeh until 1928, a measure of her popularity with black audiences. Many of her records sold well, but, sadly for present day listeners, they sold only to the black populace who were largely poor. Therefore, when found today they are usually in sad condition. We have chosen to use the titles where her accompaniments are of the greatest jazz interest (the jug band titles are, we understand, to be the subject of a re-issue project by another label), but many we would have liked to include have been impossible to find in good enough state for us to make a reasonable transfer and several of those we have included are below the standard that we would have preferred to use. However, we feel that their musical quality more than compensates for the inevitable extraneous noise and distortion.

A half a dozen titles made for the rare QRS label in late 1928 ended Sara Martin’s recording career. By 1930 she had retired form show-business and turned to gospel-singing. In later years she operated a nursing-home in Louisville, where she died on 24th May, 1955.