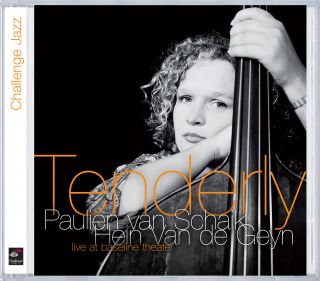 Catalog number: CHR 70099
Releasedate: 26-02-10
This is the result (for the first time on record ten years ago and now in its re-release) of two people that had been musically growing towards each other, had been growing within themselves. It is friendship you hear, it is respect you can hear; respect for the music, respect for each other. It is risk you hear, it is naked truth you hear. It is the music of two passionate and loving people. Love and passion for life, music, the instrument, people......
Paulien Van Schaik: vocals
Hein Van de Geyn: bass

Paulien van Schaik and Hein Van de Geyn met and kept bumping in to each other. They played together quite often and after a while they felt a record was a logical thing to do next:  "So we had to record.... and man, that was going to be easy. A few good mikes, a good machine.... Hours were put on tape. And we listened, and we were critical.... and it just was never good enough. Close to perfect... yes, but lacking in that outward emotion. We couldn’t catch on tape what we had felt during those informal evenings at the club. In the meantime I had built a theater at my house. A cozy, lovely room with a stage, nice light, a good sound and place for 40 people to sit and have that glass of wine, and experience the utmost intimate setting to enjoy music in. So here we had it, the perfect ingredients: a place, an audience, those same mikes and recorder. Three Sunday afternoons were planned, people came. We all had a wonderful time together. Informal, intimate, magic. 5 hours of music resulted. And a great memory. And... it had worked. We captured the essence somehow.  We took the best stuff, went to the studio of my main man Chris Weeda, who polished the music, and put the whole thing in a perfect balance."- Hein Van de Geyn in the linernotes of Tenderly

Paulien Van Schaik
At the theatre academy in Amsterdam they told me to do something with my singing first and then come back the next year. I never went back, music was all I ever needed.

At the end of my studies at the conservatory I found that I also wanted to write songs. After a year in the United States (at the Berklee College of  Music) where I focused on songwriting, I started building up a repertoire of  my own songs. At the same time I got to know Hein van de Geyn. He’d  heard a demo with my songs and asked me ‘when we were going to do  something.’ After recording sessions of these songs however, we always  ended up playing standards together. What a combination, just a voice and a bass. Such fun, we became all the more excited playing together. It was so thrilling, pure and honest. Three concerts, recorded live, resulted in our first CD ‘Tenderly’, which was awarded the ‘Edison Jazz Publieksprijs’ (a renowned Dutch music award). ‘In Summer’ is our second album, on which we invited Belgian trumpet player Bert Joris as a guest. Then followed a new expansion of the duo with cellist Frans Grapperhaus and violinist Yvonne van de Pol. We recorded ‘MUSING’, did another theatre tour and played on numerous  festivals (North Sea Jazz Festival 2007). After 10 years of playing with Hein, we seem to have come back to the base of the duo with our latest project. We invited Turkish drummer/percussionist who is accompanying us in a very subtle way, with brushes on a newspaper and his hands on different  percussion instruments. A very exiting and dynamic new impulse for Hein and me.

Hein Van de Geyn
ein Van de Geyn (1956) studied classical violin for 15 years, playing pop and blues on guitar, and changed to bass-guitar in. his late teens. Soon Hein played in dixieland-bands, but with his self formed bebop group he got awarded "best soloist" on the 1977 Laren Jazz festival. This made him Pick Up the double bass, and start a career as jazz musician. In 1980 Hein moved to the USA, played and recorded with many great musicians and in 1983 returned to Europe to become one of the most sought after bass players. In 1990 Hein made the first album under his own name, a duo with Lee Konitz. Hein toured and recorded with Philip Catherine, Chet Baker and many years with Dee Dee Bridgewater until he decided in 1996 to pursue his own career as a leader and a bass-teacher. On some 80 records his name can be found as composer, arranger or solo bass player. In 1994 he created his group Baseline with John Abercrombie and Joe LaBarbara and co-founded with Anne de Jong and Joost Leijen the Jazz label CHALLENGE JAZZ , for which he is still producing a growing number of successful recordings. He received the Bird Award and the prestigious Prins Bernhard Fonds Music Prize (for the stimulation of young musicians and his merit for European Jazz in general) and was elected as "Best European Acoustic Bass Player".