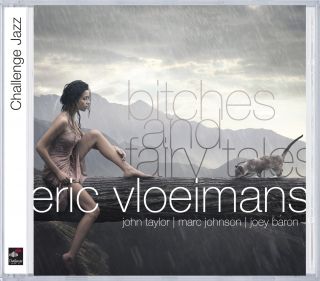 Catalog number: CHR 70061
Releasedate: 01-10-10
Now that Eric Vloeimans has earned worldwide recognition and fame with his music, it is time to rerelease some old stuff. And what great stuff this is!melody Comes first on this splendid album and sometimes Vloeimans makes an adventurous trip into avant-garde. Nevertheless all music stays accessible, with a superb band/rhythm section!

Hein Van de Geyn: “Eric Vloeimans and Challenge have been together since the label started in 1994. I’ve always had a soft spot for Eric because of his individuality, great sound, spontaneity and adventurous approach to music. You could never pigeonhole Eric; he’s too inside to be an outside player, and too outside to be in. Eric just plays music in the most open-minded way. Good compositions, fine band, good vibes, great expression and connection to the public, that’s how Eric has always struck me."

"[In 1998 Eric was] on the verge of becoming an important European player. To underline this, and to give Eric the exposure he deserves, we came up with the idea of recording him and his music with a truly international quartet. And what a band! British pianist John Taylor might be one of the most important improvisers of our time, great touch, idea’s, rhythm; breathtaking. Marc Johnson doesn’t need to be introduced. Since his collaboration with Bill Evans at the end of the 70’s, Marc has really belonged to that elite group of bass players that is way up there. Joey Baron is a magician. No words can describe his fantastic intuition, his liveliness or his quickness of response. To hear this band  play with Eric is a wonderful experience, with Eric full of adventure, contrast, beauty and exaltation." - Hein Van de Geyn October 14, 1998 (in linernotes of 'Bitches and Fairy Tales')

Dutch trumpet player Eric Vloeimans (1963) is regarded as one of Europe's best performers with an extraordinary talent for playing original music with outstanding quality. Vloeimans prefers recording original compositions on his many award winning cd's, however he can often be heard performing a wide variety of tunes. As a composer he does not feel restricted to one particular style, and he has managed to create an evocative, harmonic language of his own. His writing is fresh and creative, yet not without feeling and respect for tradition. Eric Vloeimans is unique among many of Holland's top international jazz artists in that he does not shy away from playing beautifully. He is a rare musician that has mastered the complete range of the trumpet, from the energy laden high notes to the soft, velvety, almost wooden sounds. The talent and the expressive power of Eric Vloeimans' music have been honoured by his winning the Dutch Edison Award four times, the Elly Ameling Prize of the City of Rotterdam, the Boy Edgar Award and the prestigious Bird Award at the North Sea Jazz Festival.

Eric Vloeimans has been active in a wide variety of ensembles all over the years. The two ensembles that he works with now are The Eric Vloeimans Trio 'Fugimundi', with the surprising Anton Goudsmit on guitar and rising star Harmen Fraanje on piano. This trio performs acoustic (jazz) chamber music. Their broad repertoire ranges from contemporary jazz, hymns, world music to occasional standards, all of which is presented with warmth and wit. His other band is Eric Vloeimans' Gatecrash, which features soundscape master Jeroen van Vliet on Fender Rhodes and keyboards, the inventive Gulli Gudmundsson on bass, electric basses and effects, and the up and coming Jasper van Hulten on drums. Vloeimans expands his trumpet mastery with electronics special effects. Gatecrash has earned a reputation as one of Europe's top cross-over bands between jazz and pop. The music ranges from lazy lounge music to hard core uptempo beats and spaced out moods, with Zappa-influenced odd meters. It's a band that sweeps the audience away.

Vloeimans' performances and recordings with a multitude of other formations has shown his versatility. His musical talent, easy-going attitude and great sense of humour have brought him to play with national and international artists such as John Taylor, Marc Johnson, Joey Baron (all three with him on 'Bitches and Fairy Tales'), Mercer Ellington, Peter Erskine, The Rotterdam Philharmonic Orchestra, Jasper van 't Hof, Han Bennink, Furio di Castri, Charlie Mariano, Nguyên Lê, Jimmy Haslip, Jarmo Savolainen, Philippe Catherine, Lars Danielsson, Michael Moore and many, many others.

His musical collaborations have taken Eric Vloeimans abroad many times. With diverse artists and ensembles he played all over Europe, Indonesia, China, the Middle East, South Africa, U.S.A. and Japan. Experiences from his travels influence his music constantly and can be heard in many of his compositions. Eric Vloeimans plays from the heart and has shown a remarkable power to create bridges and reach the hearts of audiences all over the world. In October 2008 and in 2010 he made US tours with his trio 'Fugimundi'- Anton Goudsmit on guitar, Harmen Fraanje on piano, and Eric Vloeimans of course, on trumpet. From this also a extraordinary live-album was made: 'Live at Yoshi's'.