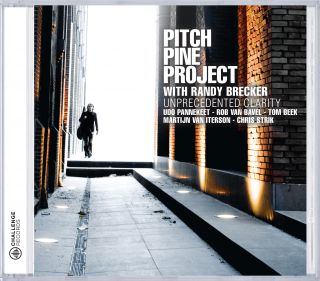 Catalog number: CR 73263
Releasedate: 01-03-08
The Pitch Pine Project is unique in many ways. In 2002 Udo decided to start his own group. His wanted to get together with the very best musicians he could find and to try and create an exclusive sound. "I had only a couple of finished tunes but a very clear idea of how the band should sound." says Udo, "Then I approached the musicians." Players with different styles and characters, but with a mutual bond. It seems Udo's decision turned out just right. It was magic from the first note. "Everything fell into place," Udo explains, "the combination of people and this music couldn't be better. Our music is a mixed bag of styles and colors, always strongly melodic and with a warm acoustic character." With its many references to the music of Wayne Shorter and Weather Report, the music is heavily influenced by the seventies. Still, the sound of the Pitch Pine Project is unlike any other band because of the original compositions of Udo Pannekeet. In 2004 their first album "Quarantine" came out and got some very good reviews. They played at the North Sea Jazz Festival in 2005 and in 2006 at the Midem in Cannes (France) at the Dutch North Sea Jazz Night. Following a very succesful gig with trumpet legend Randy Brecker in June 2006, on this second album Mr. Brecker is featured as one of the soloists.
“I first met Pitch Pine Project during June of 06 when I played an open air concert with them in Enschede (the Netherlands) with barely a rehearsal. In short they played my tunes like they wrote them, and their tunes were unusually memorable, plus each and everyone of them were great players - I thought in my head during the concert that it sounded as if we had been playing together for years...we made a point of hanging out after the gig and decided to figure out a way to play together again...the first result of that declaration is this CD - and hopefully there will be many more times that myself and Pitch Pine Project can collaborate.”