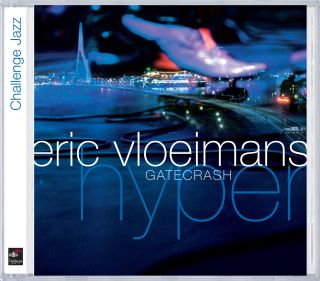 Catalog number: CHR 70144
Releasedate: 01-04-08
To really do justice to the dynamics and power of Eric Vloeimans’ new band ‘Gatecrash’, the music was recorded live at the Lantaren/Venster theatre in Rotterdam on December 2, 2006.
“That evening in December 2006 was magic. Eric Vloeimans, Challenge artist since 1994, played a breathtaking concert with his new band Gatecrash at the cozy Lantaren/Venster theater in Rotterdam. Two hours of music played by Eric and his new electric band; I was sitting there next to sound engineer Tijmen Zinkhaan and was smiling all night long. The band was strong, precise; there was adventure, risk, tightness; a mature Eric Vloeimans that knew how to shape the music and communicate his emotions outwards.
Eric and I decided to release a nice and fitting combination of tunes on one single CD (Gatecrashin’ CHR 70138) and keep another set of music on the shelf for a while. Now a year after the release of Gatecrashin’ I am proud to present you “Hyper”; a wonderful set of music from that same evening, completed by a fascinating tune by composer Michel Banabila. Thank you Eric, Jeroen, Gulli and Jasper .... you are the best!”