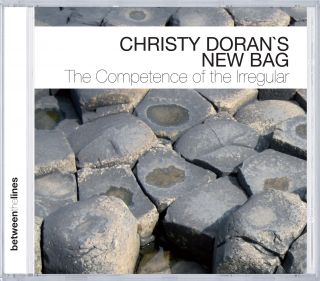 The Competence of the Irregular

The Competence Of The Irregular“ is already the sixth album by „New Bag“. Two of them have been released by Double Moon Records and two already by Between The Lines. The last album from 2006 (BTLCHR 71214, „Now’s The Time“) was purely acoustic, but this time the band is returning to electric instruments. Because the „New Bag“ has toured through all of Europe extensively since its inception (i.e., since 1997), implicit understanding has developed naturally between the musicians. The sole change: since the severe illness of Fabian Kuratli, Dominik Burkhalter is new on the drum set, but he has fit in seamlessly.

On the other hand, Hans-Peter Pfammatter on the keyboard and Wolfgang Zwiauer on bass have been part of the group since the beginning. They create a range of sounds together with Doran, in which Bruno Amstad clearly and audibly feels at home. The latter is one of the best of his kind in Europe; hardly anyone has such a great variety of sounds and such an immense range of tones as he does. Describing the music is not easy, because it defies any simple categorization. Of course, improvisation is an elementary component, but clever and unique melody lines also wind across a solid, often rock music-like and funky groove. You can never be certain in which direction the rhythm and melody will go in the next moment; listening remains suspenseful on principle.