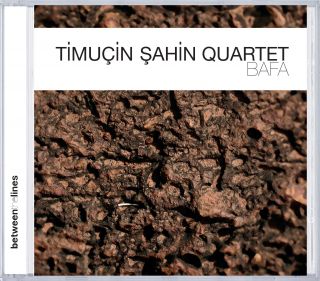 
Timuçin Sahin's skills as guitarist and composer have already been known by insiders for years, and his good reputation is now taking him to big venues, including in Europe. Both his compositions and his playing on his double-neck guitar – his trademark – radiate an incomparable individualism. For example, his music sounds compassionate, melodic, almost melancholic at times, only to break out into wild, rock-influenced riffs in the next moment. You hear an ingenious amalgam of Xenakis, van Halen, Hendrix and Ornette Coleman, but not copies of these sources of inspiration for Sahin.


Born in Turkey (1973), Sahin emigrated to Holland in 1992 where he studied jazz guitar in Hilversum and Amsterdam followed by studies at the Manhattan School of Music. He won numerous prizes (Dutch Jazz Competition, Jur Naessens Music Award and Deloitte Jazz Award) and soon was a teacher himself at various colleges (NYU New York, Amsterdam Conservatory and Manhattan School of Music). Over the past years, he has played on the stage and/or in studios with musicians such as Randy Brecker, Greg Osby, Mark Turner, Mike Mainieri and many more. The compositions on "Bafa" are very complex, which in turn puts extremely high demands on his band members. John O’Gallagher at Sahin's side is apparently able to keep pace effortlessly with the extremely fast melody lines in the unisono passages. He was the saxophonist in the Grammy award-winning Joe Henderson Big Band and for Maria Schneider; he has also played with innumerable big names in jazz (John Medeski, Tom Harrell, Chris Potter, Uri Caine, etc.). Thomas Morgan is one of the young bassists, who have already become solidly established in the scene; he has accompanied Steve Coleman, Joey Baron, Craig Taborn and many more. The former student of Ray Brown and Peter Herbert is unbelievably versatile and open for musical experiments. That can also be said about the multi-instrumentalist Tyshawn Sorey, who has experienced a meteoric career over the past years. He was and is a regular member of the bands of Steve Coleman, Dave Douglas, Vijay Iyer and others. His comprehensive knowledge of music and almost impossible virtuosity make him into perhaps the most exciting drummer of our times.