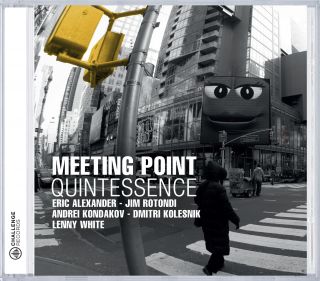 Catalog number: CR 73291
Releasedate: 30-10-09
The coming together of five gifted musicians in a group that encourages individuality and cooperation, independence and collaboration, is the ideal (if not always the norm) in the creation of jazz.  The band Meeting Point not only strives towards that ideal, it achieves it in a way that shows off both the separate strengths and collective vigor of its members.  In living up to the endeavor’s title of Quintessence these five men show that they are truly the embodiment of what this great music is all about.
Eric Alexander: tenor sax | Jim Rotondi: trumpet, flugelhorn | Andrei Kondakov: piano | Dmitri Kolesnik: bass | Lenny White: drums

Made under the watchful eye of renowned jazz producer Todd Barkan Quintessence exemplifies the type of jazz that excites New York City club goers every night. The date kicks off with Kondakov’s Secret Mission. The appropriately titled outing, inspired by a James Bond movie, opens with an ominous sounding melody featuring somewhat strident horn harmonies articulated over the composer’s intriguing piano figure anchored by Kolesnik’s strong beat, while being driven by White’s powerfully propulsive drumming. Reminiscent of the exhilarating Jazz Messenger sound of the sixties, replete with electrifying solos from Rotondi, Kondakov and Alexander (in the Hubbard-Walton-Shorter tradition) and a climactic White solo executed over a dark piano vamp, the piece epitomizes the ability to the group’s members to extend the tradition which inspires all of them.

Night City, the second of Kondakov three compositional contributions to the date, his impression of a sleeping metropolis’s deserted streets after dark, is an achingly beautiful ballad that recalls the pathos of Monk’s Ugly Beauty. Alexander and Rotondi’s sounds blend handsomely on the melancholy melody, while Kolesnik’s warm bass and White’s sensitive brushes tastefully accompany the pianist’s delicately articulated solo.


The band Meeting Point epitomizes the fruits of internationalization of the New York jazz scene. The group evolved out of the quintet first heard on Dmitri Kolesnik’s debut disc, Blues For Dad, an album dedicated to his father Victor Kolesnik, a fine jazz pianist who first encouraged his son’s immersion in the American music. The date featured well known American players Eric Alexander and Lenny White, along with his Russian countrymen trumpeter Alex Sipiagin and pianist Andrei Kondakov. Kolesnik and Kondakov initially met more than twenty-five years ago (when the two were part of a small circle of young straight ahead jazz players in Russia) but did not play together until shortly before the record date. The two felt an immediate rapport, Kolesnik noting, “From the first time we played together he played my original music with such ease, as if he had written it himself – something I’ve seldom felt with other pianists.” Kondakov explains, “I like Dmitri’s music because it has a unique combination of Russian soul and an authentic American jazz feel.”

For Kolesnik’s second date, Five Corners (coproduced with Kondakov), Jim Rotondi joined the group. He says of the trumpeter, “Jim is a great force on his instrument and he and Eric understand each other so well it really adds to the feel of the music.” Kondakov concurs, saying “Jim is a brilliant virtuoso; I just love the bluesiness of his playing.”  Of Alexander, Kolesnik notes, “Eric is such a very musical player, who while rooted in traditional jazz has no trouble with some of the out of the ordinary things in my music.” Again, Kondakov agrees, declaring “There’s a real freedom to his playing and he has his own sound.” Both of Kolesnik’s albums spotlighted the Leningrad born bassist’s considerable compositional capabilities along with additional contributions from the pen of Kondakov. After the second date and working around the city a while as the Kolesnik-Kondakov Quintet, it was decided that the fivesome, which was developing its own cohesive sound, would be better served as a cooperative endeavor, showcasing all of the member’s writing along with their collective playing.

The unified personality of the band comes as no surprise considering the individual players’ musical philosophies. Eric Alexander notes, “I met Dmitri and Andrei when they had me participate in a gig and a recording project with them and we hit it off musically right away. Both of those guys are very seriously into the tradition of the music – they know a ton of tunes and really love straight ahead jazz, so we were always a good fit.” Alexander’s longtime front line partner, One For All trumpeter Jim Rotondi, agrees with him concerning their Russian musical partners, praising their abilities both as instrumentalists and composers. He’s says, “They’re great players and have very strong compositional styles that are different from each other. Their songs are always fun to play and the way they are written, they kind of play themselves – they don’t have those kind of spots that you have to work out to make them flow.”

Alexander elaborates saying, “Their compositional style is interesting because it is grounded and rooted in the types of progressions and melodies and forms that we’re accustomed to dealing with in straight ahead playing, but they’ve got their own kind of twists on things – different – for lack of a better way of naming it, ‘Russian sounding’ melodies, moods and ways of ordering things. They’re very soulful types of tunes. I guess that’s part of their musical tradition over there – like Rachmaninoff and Tchaikovsky. It’s real soulful romantic music. Some of it’s hard as hell to play, but I like it.”

Lauding the contributions to the music of the group’s senior member, drummer Lenny White, Alexander notes, “Lenny, he’s one of the greatest drummers in the world. He’s always a joy to work with and he loves dissecting those tunes that Andrei and Dmitri write, figuring out ways to put different grooves on them – so he’s a perfect fit for the band.” Rotondi adds, “He has a complete supreme understanding of music – of how it works, how things should go. And his ride cymbal has driven so many great trumpeters. His swing beat has a propulsion that I don’t get from too many other drummers.” The New York born White was brought into the band by Kondakov with whom he has played with for the past decade in a quartet that also features Russian tenor man Igor Butman and bassist Eddie Gomez. He says of the pianist, “He’s an excellent writer. He doesn’t just write jazz, he’s written chamber music, fusion, different things.” He goes on, “I really like Dmitri’s and Andrei’s music, that’s the thing that excites me about playing with this group.”