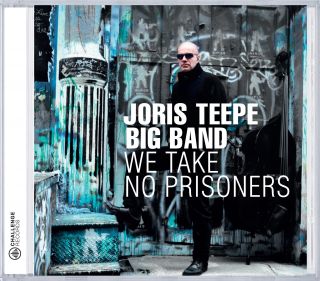 We Take No Prisoners

Last year he was invited to bring his quartet from New York to the Netherlands to perform with the “North Netherlands Sympony Orchestra" of which he was commisioned to compose music. Due to the succes of these concerts, Joris was invited in April to be the guest soloist for the Radio Big Band in Bucharest Romania to perform a program of his music. Upon accepetance of this Joris had to re-arrange all the music from Symphony Orchestra (87 musicians) to Big Band (17 musicians). Back in New York Joris showed the DVD of the Bucharest concert to the manager of his label Twins Records and he liked the idea of starting the Joris Teepe Big Band and so in August, after a series of concerts, the band will go in the studio for their first CD of all original music composed and arranged by Joris Teepe

The methodology of Joris Teepe includes mixing high energy with beauty, mixing precisely written charts with improvisation or even chaos and mixing tradition with his own twisted ideas. Leading great musicians, who, according to Joris, all immediately understand where he wants the music to go, is a magical experience to him at every gig. Recording this music felt “as if I’ve invited them to my birthday party. With this recording, I hope to make everyone out there realize that jazz is alive and still developing into creative paths.”

Bassist Joris Teepe has been living in New York since 1992, but was born and raised in The Netherlands. In 2007, Teepe was commissioned to compose music for the North Netherlands Symphony Orchestra, where the Joris Teepe Quartet was invited to perform. These concerts received great critical acclaim and as a result, Joris was invited to be a guest soloist, performing his own music, for the Radio Big Band in Bucharest, Romania. Joris successfully re-arranged all the music from the Symphony Orchestra made up of 87 musicians to the Big Band formed by 17 musicians. The Bucharest concert was such a tremendous hit, inspiring him to create the Joris Teepe Big Band.

Teepe has developed an extensive knowledge of every aspect of jazz performance and never denies his artistic vision and adventurous personality.

Teepe's work as a writer and arranger makes a substantial contributionto his artistic statement. 41 of his original compositions have been recorded on 16 different CD's. His hip arrangements of Benny Golson's "Whisper not ", Billy Strayhorn's "Chelsea Bridge" and Randy Brecker's "Some Skunk Funk" are becoming well known in the Jazz Community. He has arranged music for many singers, such as Deborah Brown, Fay Claassen, Nana, Mathilde Santing.

Recently Joris Teepe has been writing for large ensembles. He wrote an extensive repertoire for Big Band and for Nonet, and several larger pieces for Jazz Quartet and Symphony Orchestra.

Joris Teepe is the Director of Jazz Studies at the Prince Claus Conservatory in Groningen, the Netherlands. He is also inventer and founder of the program New York comes to Groningen, a unique system of jazz education with a rotating visiting faculty from New York teaching at this International University in Europe. Teepe is the bass instructor at the New Jersey Performing Arts Center. The Wachovia “Jazz for Teens” program. Joris Teepe is teaching several jazz camps each summer, such as Litchfield Jazz Camp (Connecticut), Jazzinty (Slovenia) and Orsara Jazz (Italy).