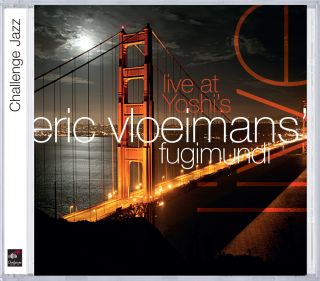 Catalog number: CHR 70151
Releasedate: 24-04-09
Anyone back in 1959, when Miles Davis released his legendary album ‘Kind of Blue”, who wondered whereto jazz trumpet styles would develop, gets one of the best answers here.
Eric Vloeimans: trumpet | Harmen Fraanje: piano |
Anton Goudsmit: guitar
(….) I’d had this recording for a few days now, and had been listening to it so often that I lost my grip on it. On the one hand the music was exuberant, on the other introspective, but playful. To my ears it wasn’t jazz, though surely experts would call it that. I am not so fond of experts. They are what they are because they say that’s what they are. That’s too simple. I could do the same. But I don’t.

(…) It could be, I realize, that Vloeimans’ music had made me jump in time; I skipped six or seven weeks thanks to him. However I still had no idea what to write about this music. Enchanting for sure. Melancholic as well. Happy, obviously.

(…) What’s in a name? Vloeimans, Flowmans.
Just say that name a time or ten, roll it around in your mouth, let it bounce against your teeth and you’ll understand this elusive music; fluid, flowing, fluide as the French say, liquid.
Few things are as difficult as creating something that seems completely effortless, fluid, flowing, or at least that’s the way it sounds.

The music of Eric Vloeimans (and his companions also have names that resonate; Goudsmit, Goldsmith; Fraanje, Fringey) flows like water, flows like a dance, flows like a traffic artery and flows like life itself. It’s music you cannot grasp, it keeps slipping through your fingers.

Flowmans/Vloeimans; a man that flows through his magical instrument - the trumpet. Every artist, whatever his stature, seeks himself. Yet only few succeed. Most fail because they are afraid to be themselves. This is what makes Eric Vloeimans so fascinating; he flows himself,
the artist he truly is.

Dutch trumpet player Eric Vloeimans (1963) is regarded as one of Europe's best performers with an extraordinary talent for playing original music with outstanding quality. Vloeimans prefers recording original compositions on his many award winning cd's, however he can often be heard performing a wide variety of tunes. As a composer he does not feel restricted to one particular style, and he has managed to create an evocative, harmonic language of his own. His writing is fresh and creative, yet not without feeling and respect for tradition. Eric Vloeimans is unique among many of Holland's top international jazz artists in that he does not shy away from playing beautifully. He is a rare musician that has mastered the complete range of the trumpet, from the energy laden high notes to the soft, velvety, almost wooden sounds. The talent and the expressive power of Eric Vloeimans' music have been honoured by his winning the Dutch Edison Award four times, the Elly Ameling Prize of the City of Rotterdam, the Boy Edgar Award and the prestigious Bird Award at the North Sea Jazz Festival. Eric Vloeimans has been active in a wide variety of ensembles all over the years. The two ensembles that he works with now are The Eric Vloeimans Trio 'Fugimundi', with the surprising Anton Goudsmit on guitar and rising star Harmen Fraanje on piano. This trio performs acoustic (jazz) chamber music. Their broad repertoire ranges from contemporary jazz, hymns, world music to occasional standards, all of which is presented with warmth and wit. His other band is Eric Vloeimans' Gatecrash, that has earned a reputation as one of Europe's top cross-over bands between jazz and pop. The music ranges from lazy lounge music to hard core uptempo beats and spaced out moods, with Zappa-influenced odd meters. It's a band that sweeps the audience away.
Vloeimans' performances and recordings with a multitude of other formations has shown his versatility. His musical talent, easy-going attitude and great sense of humour have brought him to play with national and international artists such as Mercer Ellington, John Taylor, Marc Johnson, Peter Erskine, The Rotterdam Philharmonic Orchestra, Jasper van 't Hof, Han Bennink, Furio di Castri, Charlie Mariano, Nguyên Lê, Jimmy Haslip, Jarmo Savolainen, Philippe Catherine, Joey Baron, Lars Danielsson, Michael Moore and many, many others.
His musical collaborations have taken Eric Vloeimans abroad many times. With diverse artists and ensembles he played all over Europe, Indonesia, China, the Middle East, South Africa and Japan. Experiences from his travels influence his music constantly and can be heard in many of his compositions. Eric Vloeimans plays from the heart and has shown a remarkable power to create bridges and reach the hearts of audiences all over the world.