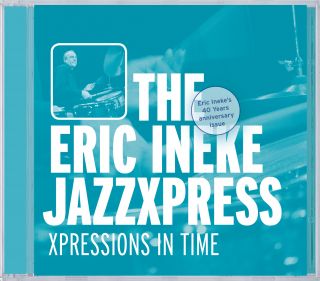 Catalog number: DBCHR 75924
Releasedate: 04-05-09
David Liebmann’s comment on the first CD of this band evenly stands for this third one:
“If you like real jazz, straight ahead without any gimmicks, this CD is for you. And if by chance you are not familiar with the particular idiom, once you hear this recording you will be hooked. The feeling that comes off the CD is indisputably joyous, truly capturing the essence of the music we call jazz.”
Eric Ineke: drums | Rik Mol: trumpet & fluegelhorn | Sjoerd Dijkhuizen: tenor saxophone | Rob van Bavel: piano | Marius Beets: bass & bass guitar

This is the third Daybreak-release of the Eric Ineke Jazz Xpress and celebrates Ineke’s
fortieth year as a fulltime musician and picks up the threads from the band’s first CD
“Flames ‘n’ Fire”, on which Eric coomented:“We did compositions I grew up with, by Herbie Hancock, Chick Corea and Wayne Shorter, and some tunes by band members in the same idiom: hardbop and beyond.”
For the second Daybreak-issue, producer Dubiez suggested the band would delve into the legacy of Ivie Anderson. With some guest soloists – most notably American singer Deborah Brown – the group recorded “For The Love Of Ivie” with their own, updated versions of twelve songs associated with “the best vocalist that ever worked regularly with Duke’s band,” in Ineke’s words.

On this new third CD the quintet plays more fresh arrangements of existing material and some original compositions. The second number, Monk’s all-time classic “ ‘Round Midnight” in a well worked arrangement by Rob van Bavel, gives a splendid example of a good hour of solid new hardbop.

Since 1984 Eric Ineke is member of the Dutch Jazz Orchestra that went to the USA in 1995 to play a concert for the Duke Ellington-conference in Pittsburgh and also recorded the Music of Billy Strayhorn (CHR70089/92). In 1990 he started as a teacher at the Royal Conservatory in The Hague. In 1999 he formed the Wolfert Brederode/Eric Ineke Quintet and recorded the CD's "Trinity" and "Pictures of You" (A-records). With David Liebmann and Marius Beets he recorded “Lieb Plays Wilder” (DBCHR75214).

In 2006, Eric Ineke’s JazzXpress came about. “While driving to a gig with David Liebman in Antwerp, Belgium, Dave said it was about time I started my own hardbop group. ‘You should do this, and ask some good youngsters.’ That night, Marius Beets was on bass and tenor saxophonist Sjoerd Dijkhuizen came by. Marius said: ‘This is what we’ve been waiting for!’ Sjoerd immediately asked if he could be part of it. Of course he could!” For the piano chair Eric asked Rob van Bavel, with whom he had developed ‘a great rhythmic rapport’ after they both had been part of the Piet Noordijk Quartet and the high-energy Jarmo Hoogendijk/Ben van den Dungen Quintet. Young trumpet sensation Rik Mol – just 22 while I’m writing this - was recommended by his former teacher Jarmo Hoogendijk, who had to retire from stage because of a lip injury.
The band’s name was made up by Eric’s fellow musicians. “They decided that my name should be part of it, and they invented the word Xpress, with the capital X. It looks good on jazz club and festival posters.”