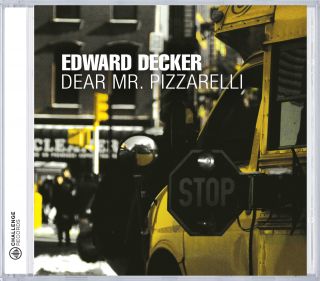 Catalog number: CR 73289
Releasedate: 04-06-10
Basically, this CD is a tribute to Bucky Pizzarelli's solo guitar playing.  Although none of the arrangements are Bucky's, because they are all Eddie Decker's, they are crafted in the same way Bucky crafts out his guitar solo's. Pizzarelli's virtuosity has indeed passed along to Eddie Decker, including the love for just playing beautiful solo-guitar music.
Eddie Decker: solo guitar (seven string guitar)

Mary Pizzarelli: "What a surprise to be sitting on the porch one Saturday morning with my father—and Eddie comes over to have us listen to his new CD. He told us that he had decided to lay down some tracks for his birthday and he wanted my father to hear it. We were supposed to play golf altogether, but the clouds rolled in and the skies got darker and darker—so we sat on the porch while it was pitch black outside and started listening to this work of art. I was transformed by the music on our little boom box—and, as I listened, I was so moved by each song and amazed that Eddie did each song by ear. Song after song, I heard a tribute to my father —chord changes and melodies played with such sophistication that you instinctively knew from where they came. It was touching to watch my dad and Eddie, as teacher and pupil ; Eddie wanting some feedback from his teacher. Needless to say, it was a very special moment at our house, and I immediately said to Eddie, “You’ve got to call this ‘Dear Mr. Pizzarelli’ “— because in each song you can hear the virtuosity that was passed along—including the love for just playing beautiful solo-guitar like no other."

Basically, this CD is a tribute to Bucky Pizzarelli's solo guitar playing.  Although none of the arrangements are Bucky's, because they are all Eddie Decker's, they are crafted in the same way Bucky crafts out his guitar solo's. Pizzarelli's virtuosity has indeed passed along to Eddie Decker, including the love for just playing beautiful solo-guitar music.


A native of Bergen County New Jersey Edward Decker has loved the guitar for as long as he can remember. With his early influences with legends such Wes Montgomery, Bucky Pizzarelli, Nat King Cole, and Andre’ Previn, he was unknowingly building a great foundation for his current style of paying.

During his college days at North Texas State University, Edward toured throughout the country with a 10 piece band from Texas named “Ten Grand”.  The group featured top musicians such Michael Baker, (drummer from Jeff Lorber Fusion and Whitney Houston), along with members of the Woody Herman band.  When Mr. Decker finished college and returned to New Jersey he also began performing and writing music with Ray Simpson, lead vocalist from the Village People.  Even though he had been involved in so many genres of music, Decker started focusing on his love for jazz and specifically on the seven string guitar style mad by Bucky Pizzarelli and his son John.

Several years ago, the National Endowment of the arts recognized Decker’s prowess on the seven string guitar and awarded him a grant study with Bucky Pizzarelli.  He wasted no time in honing his craft and studying with (his long admired influence) Bucky (who took a personal interest in Edward and the friendship led to Edward acquiring one of Bucky’s prized seven string guitars).  In 2003, Mr. Decker transcribed and penned in some of Mr. Pizzarelli’s famous seven string solo guitar pieces for Mel Bay Productions.  The book/cd set is called “Bucky Pizzarelli Master Jazz Guitar: Solo Collection”. In 2006 Mr. Decker was invited to perform solo guitar at Bucky Pizzarelli’s ‘80th Birthday Tribute” which was part of NYC’s JVC Jazz Festival.

In the spring of 2007, Mr. Decker produced, arranged, directed and played guitar on Broadway artist Lillie Kae’s debut album. “I’m Glad There is You”.  The CD known for its spare and smokey “drum less” sound (popularized by Nat King Cole) is no doubt directly reflected by his early influences.  In addition, he is currently touring with the Tony DeSare Trio. (www.tonydesare.com)

Mr. Decker is looking forward to January 2010 when he will release his first solo guitar CD entitled “Dear Mr. Pizzarelli”.