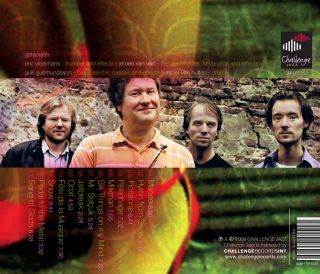 Catalog number: CHR 70152
Releasedate: 02-10-09
In the patient surroundings of the studio Vloeimans managed to explore the possibilities of his electronic amplified band 'Gatecrash' once again to a higher level.

Heavens Above! is an album with a wide variety of pieces from the lighthearted and danceable to the more transcendental and meditative.

Eric Vloeimans about the compositions on this cd:
Maceo was written after a performance by Maceo Parker at a festival in which I also played with Gatecrash. I was very impressed by the grooves and the terrific dance rhythms. This piece is in honor of Maceo Parker.

Hymne is a component of the larger composition Snow by Jeroen van Vliet.
I found it such an overwhelmingly lovely and heavenly theme that I got a lump in my throat – more than enough reason to have it as an independent track on the Album.

Floratone is one of Jasper van Hulten’s first compositions. He felt inspired by Steve Coleman after attending one of his workshops. While writing Floratone Jasper also employed Coleman’s typical rhythmic layering to produce this special sound.
Pèlerinage is a long journey of footsteps, as in a pilgrimage. Footsteps that keep going and going…towards the light…towards the dawn..?

Milkman arose from the wish of writing a robust and randy piece. We think it came out great. Gulli talked about a Harley-Davidson groove. I always feel really rough ‘n tough when we play it. But where does the Milkman come in?

Six Things on my Mind is a trio improvisation. It was the first take on the first day at the studio. Gulli arrived later that day so the recording was yet without bass. But we liked it a lot, and Gulli contributed by thinking up this excellent title!

I’ve been interested in and influenced by Eastern music for many years. That is quite audible in the composition Mr. Selçuk, a piece I wrote for my good friend Kadir Selçuk who has done so much for jazz in my home town of Rotterdam.

When we were in the studio we decided to begin each day with some improvisations. Your ears are still fresh and we started from scratch. Jailbreak is such an open improvisation, a spontaneous creation by four musicians, right after breakfast!
Orbit is the term for “the curved path, usually elliptical, described by a planet, satellite, spaceship, etc., around a celestial body, as the sun”. It’s a meditative piece, a state of being. Hein Van de Geyn’s commentary after our first and only take was “Hey man, this piece is nothing and everything at the same time.” He couldn’t have given me a nicer compliment.

Fête de la Musique came about by combining two other compositions which give it an added value. This is a piece that I hope will cheer folks up, so that they start smiling or dancing. Our second day of recording ended up in the kitchen, laughing and doing a polonaise at the ‘fête de la musique’.
Snow by Jeroen is a contemplative soundscape. It’s timeless, and through the odd irregular groove it turns and turns without getting a firm grip. The closing hymn brings you to a standstill.

Pedal to the Metal is the most lurid piece I’ve ever written. That’s about all I can say. Just listen and enjoy Gulli’s and Jeroen’s great sound effects in the bridge.

Song of Gods is just what the title says. A sublime and generous composition by Gulli, with of course the virtuoso and inimitable Gulli himself on electric bass.

Eric Vloeimans (1963) studied jazz- and classical trumpet at the Rotterdams Conservatorium and graduated with honours in 1988, leading him to the New School in New York. There he performed with a.o. the Frank Foster and Mercer Ellington bands. Since 1989 Eric has been active in a wide variety of ensembles. His first CD's - "No Realistics"(1992), "First Floor" and "Bestiarium" - were praised for the music's expressive power, earning the Eric Vloeimans Quartet a reputation as one of Holland 's top bands. In addition Vloeimans' performances with a multitude of other formations had drawn international attention to his versatility. By now he played with the most reputable and established musicians on the scene. On his CD 's Eric prefers to record original compositions and does not feel restricted to one particular style. His writing is fresh and creative, with feeling and respect for tradition but never pretentious. In 1999 he received an Edison Award for "Bitches and Fairy Tales" and was nominated for the prestigious Bird Award at the North Sea Jazz Festival in 2000. In 2002 his whole oeuvre was awarded with the most important jazz prize in The Netherlands, The Boy Edgar Prize. In early 2006 Eric together with Jeroen van Vliet accompanied dancer Connie Janssen for some 40 performances from Rotterdam to Moscow. During this project he decided to make the step into the world of electronic music, enabling him to develop new sounds and explore new possibilities. Thus he formed his new group “Gatecrash”. Of course with Jeroen on keyboards, with the wonderful Icelandic bassist Gudmundsson and inventive drummer van Hulten.