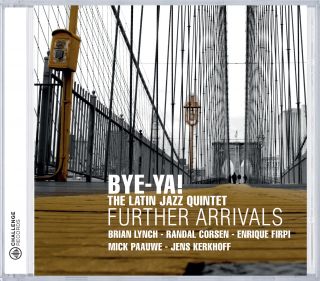 Catalog number: CR 73290
Releasedate: 02-11-09
Even with a new line-up (with Brian Lynch on trumpet and Enrique Firpi on drums) Further Arrivals is an example of the unique Bye-Ya!-sound. Bye-Ya! is Latin jazz at it's best – more than a mix between these two styles, it is interaction and reaction between latin music and jazz.
Brian Lynch: trumpet | Randal Corsen: piano | Mick Paauwe: babybass | Jens Kerkhoff: percussion | Enrique Firpi: drums

It is always very exciting and challenging for a band to record a new album with a different line up and still maintain the sound of the band. Within the first minutes of recording Bye-Ya was assured that their new setup (with Brian Lynch on trumpet and Enrique Firpi on drums) was perfect to achieve the unique Bye-Ya!-sound, Latin jazz with a strong emphasis on jazz. Further Arrivals consists mostly of original compositions.

The title song ‘Further Arrivals’ is a composition by Brian, played in a very open Guaguanco-style, it is a Latin-jazz theme in ‘Bye-Ya! tradition’.

‘Dance The Way You Want To’, another tune of Brian’s is a funky Cha-Cha, an
homage to the Boogaloo–era.

Descarga #1 is a tune by Mick and is a Cuban style 6/8 descarga.
Another composition of hers is the beautiful ballad ‘Downunder’, played as a Bolero.

‘Mellotone’ and ‘Tranquilidad’ are two Latin-jazz tunes composed by Randal.
‘Tranquilidad’ as the only quartet piece on the album is a piano feature with a beautiful Montuno at the end.

Bye-Ya! was founded by Jens Kerkhoff and Mick Paauwe in the beginning of 1999 with the idea to create a new combination of latin-music and jazz. The interaction and openness of jazz are mixed and integrated with exciting and swinging Latin-American and Afro-Cuban grooves. Complex harmonic accompaniment and exciting rhythms build up the basic for beautiful melodies and inspired improvisations – this is the formula of Bye-Ya!

Bye-Ya! is not just a project or pickup group assembled for a recording, it’s a band! A band that consists of the total of five different backgrounds, nationalities, characters, creative visions and musical evolutions which together make up the unique sound of Bye-Ya!

Enrique Firpi has been playing with Bye-Ya! since their second album’s release and has also worked with Randal, Mick and Jens in various projects before.
Having grown up in Uruguay, Enrique has tremendous experience with music from South America and the Caribbean but is also really into Jazz. He is one
of the most well-round and tasteful drummers. Added to the line-up for Bye-Ya's latest recording is Brian Lynch on trumpet. Having performed and recorded with Art Blakey’s ‘Jazz Messengers’ as well as with Eddie Palmieri, Brian embodies the fusion of (Hard-) Bop and Salsa like no one else.
Together with the original band members, Jens Kerkhoff, Mick Paauwe and
Randal Corsen the new line up of Bye-Ya! is complete.