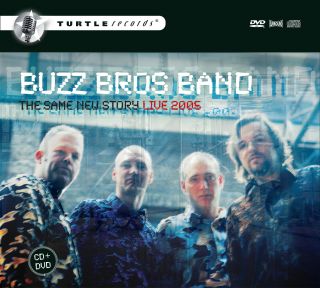 Catalog number: TR 75532
Releasedate: 02-10-09
The concert on this cd/dvd, recorded April 4, 2005 at ‘de Fabrique’ in Utrecht, the Netherlands, is a successful recording of a band ‘in shape’. As the concert progresses, the audience is continuously drawn into and carried on a music journey, travelling almost spiritually down the paths this open-minded music visits.
Marnix Busstra: guitars, electric sitar, bouzouki | Berthil Busstra: Fender rhodes, keyboards | René Dissel: double bass | Chris Strik: drums

In the interview on the dvd, interviewer Peter Blom (not a jazz aficionado himself) asks: “An evening-full program without spoken text and without songs, is that tolerable for the modern viewer and listener?”

We can happily answer this question with a firm “Yes!”, as it has become apparent that even people basically unfamiliar with the jazz idiom and improvised music show an unprecedented appreciation for our music.

Looking at the other side of the picture, increasingly fewer people listen to instrumental music which is improvised. Sometimes it seems as if the language of (jazz) improvisation is becoming extinct. We therefore hope that, through the ease of accessibility inherent to the idiom in which we improvise, this cd and dvd will reach people who would ordinarily not be touched by improvised music. They shall then enjoy this tried and true language which continually renews itself and one that, as far as we’re concerned, tells a ‘same new story’.

(Berthil and Marnix Busstra about this recording)


This High Definition Surround Recording was Produced, Engineered  and Edited by Bert van der Wolf of NorthStar Recording Services, using the 'High Quality Musical Surround Mastering' principle. The basis of this recording principle is an optimal realistic and holographic, 3 dimensional representation of the musical instruments, voices and recording venue, according to traditional concert practice. For most historic music this means a frontal representation of the musical performance, nevertheless such that width and depth of the ensemble and acoustic characteristics of the hall do resemblance 'real life' as much as possible. Some compositions in history, and many contemporary works do specifically ask for placement of musical instruments and voices all over the 360 degrees sound scape however, and in such cases this is also recorded as realistic as possible within the possibilities of the 5.1 Surround Sound standard.
This all requires a very innovative use of all 6 loudspeakers and the use of fully equal and full frequency range loudspeakers for al 5 discrete channels, and a complementary sub-woofer for the ultra low frequencies under 40Hz, is highly recommended to optimally benefit from the sound quality of this recording.

This recording was produced with the use of Sonodore microphones, Avalon Acoustic monitoring, Siltech Mono-Crystal cabling and dCS Converters.

The Buzz Bros Band is a unique Dutch formation named after the Busstra Brother, guitarist/composer Marnix Busstra and pianist Berthil Busstra. Togther with the ineensla grooving hit section of drummer Chris Strik and bassist René Dissel, the band creates an infectieus and irreplaceable sound of adventurous and catchy instrumental music.

It is the fervent interactivity in their playing and the accessibility inherent in their chosen musical idiom that makes the band so truly unique and fun to watch, hereby touching upon the essense of jazz and improvised music: personal interaction between the players, shared with those watching the performers. This makes the Buzz Bros Band accessible and interesting to a very wide and varied public.

“The Buzz Bros Band should, no, must be heard by everyone who loves incredibly beautiful electric jazz compositions.”
-    Jean-Paul Heck, ‘de Slagwerkkrant’ (Dutch drummer’s magazine)