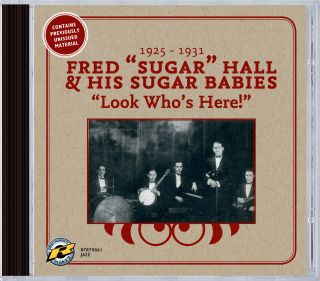 Catalog number: RTR 79061
Releasedate: 30-04-10
They have recorded a enourmous repertoire in the years between 1925-1931 but never became very famous and there is not that much information about them: Fred Sugar Hall & his Sugar Babies. But fame does not say everything because this is a cd with wonderful rarities, treasures of music recorded in the late years of the 1920's, beginning of the 1930's!
Considering the fact that Fred “Sugar” Hall and his Sugar Babies recorded in excess of 150 titles between 1925 and 1931 there is surprisingly little information to be found on him or his long time partner, Arthur Fields. Quite a few of Hall’s records are of considerable interest as jazz, but he is generally ignored by writers on the subject.We are fortunate, thanks to Mark Berresford, to be able to finish this CD with two previously unknown and unlisted numbers from, what would seem to be the band’s find recording session on 9th September, 1931. Two other titles from this date are known to exist, but, like several of the tracks presented here are mega rarities.

The initial sides of the band are of non-vocal, straight-forward jazz styled material e.g. “Sobbin’ Blues” and “Dallas Blues”. The eight piece band had a standard Dixieland instrumentation of cornet, trombone, clarinet doubling, alto sax, banjo, piano, brass bass and drums plus a violin. After a couple of years with no known recordings the band returned to OKeh with a new front-line, though the rhythm section remained unchanged, and the addition of Arthur Fields’ vocals.

Fred “Sugar” Hall
It seems that he was born in New York in 1898 and his birth name was Frederick Arthur Ahl. He worked as a song-plugger for several firms of music
publishers and it was almost certainly around this time that he first met Abe
Finkelstein, an aspiring lyricist, born in Philadelphia on 6th August, 1888, who had also been a professional singer in minstrel shows and vaudeville from the age of 11 under the stage name Arthur Fields. At sometime in the early 1920’s Hall formed a small dance/jazz band. In 1925 the band started recording for the OKeh label and their initial sides are of non-vocal, straight-forward jazz styled material e.g. “Sobbin’ Blues” and “Dallas Blues”. The eight piece band had a standard Dixieland instrumentation of cornet, trombone, clarinet doubling, alto sax, banjo, piano, brass bass and drums plus a violin. None of the participating musicians became famous, though cornettist George Knapp and clarinettist Carl Edlund are very competent soloists and the rhythm section provide a healthy driving force. After a couple of years with no known recordings the band returned to OKeh with a new front-line, though the rhythm section remained unchanged, and the addition of Arthur Fields’ vocals. The advent of Fields seems to signal a change of musical policy towards more novelty styled material, often written by the Hall/Fields partnership. Jack Mollick and Eddie Grosso take over from Knapp and Edlund, Blevins is temporarily dropped. But the most important change comes with the addition of Philip d’Arcy, harmonica, violin, piccolo and second
piano.  The session of 19th August, 1927 that produced “Is It Possible?” and “Someday You’ll Say O.K.” sets the pattern for everything that is to follow with the odd exception of a session, labelled “Fred Hall’s Jazz Band”, made for Banner on 11th October, 1928 which brings back a trombone (? Blevins) for the last time and reverts rather to the earlier band style. Fields is missing; Hall supplies his own “scat” vocal (as he often does throughout) but most significantly there is another change to the brass section as original source they are labelled ‘The Broadway Merry Makers’ and to top it off, the Radiex of “Emaline” is completely anonymous!

With the deepening of the Great Depression, all traces of Hall as a band
leader disappear. Hall and Fields seem to have done some morning radio show work as a singing and comedy team into the late ‘30s. Hall also became a producer on Voice of America radio. The team had founded the Piedmont Music Co Inc. in 1931 to publish their joint compositions and this was sold to Edward B. Marks Music Co in 1944. Fred Hall died aged 56, on 10th October, 1954, a year after Fields had died on 29th March, 1953 in Largo, Florida.