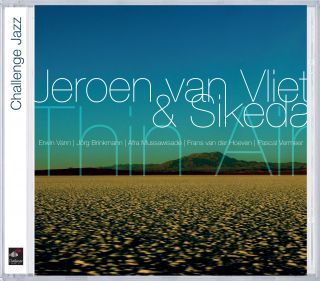 Catalog number: CHR 70155
Releasedate: 26-02-10
The result of the Composition Assignment of the North Sea Jazz Festival and Music Center Netherlands (MCN) for Jeroen van Vliet in which he chose musicians he like to work with and who inspire him. The chemistry of this match of  six artists is audible and obvious! Sikeda is born.

Jeroen van Vliet in the linernotes of Thin Air: "In 2008 I was honoured to accept the Composition Assignment of the North Sea Jazz Festival and Music Center Netherlands (MCN). I chose to write for a sextet consisting of musicians with whom I had previously worked on different occassions and whom I admire. Besides the trio with Frans and Pascal that recorded The Poet & Other Tales in 2007, Afra was the perfect match, both on percussion and with his sounds and samples. I asked Erwin, with whom I had recorded several albums before, for his lyricism and beautiful ideas and sound. When I heard Jörg I was instantly hooked by his creative playing, so I asked him to join. The band is now called Sikeda (pronounced SEE - KAY- DAH), a word without meaning, chosen simply for its sound. Enjoy the ride. "

Jeroen van Vliet, born April 1965 in Rosmalen, the Netherlands, studied piano with Willem Kühne and Bert van den Brink. In 1991 he graduated cumlaude at the Conservatory of Utrecht. At 19, he won both, the first and the soloist price, at the Middelsee Jazztreffen Leeuwarden and three years later he did the same at the prestigious Meervaart Jazzconcours in Amsterdam. Van Vliet gained recognition by working in the groups of  Paul van Kemenade and Eric van der Westen. During the years he worked with international artists as (a.o.) Bob Malach, Kenny Wheeler, John Zorn, Norma Winstone, Charly Mariano en Erkan Ogur. The last few years his cooperation with trumpeter Eric Vloeimans is very rewarding in the group Gatecrash that won an Edison Award in 2007. Here he uses the Fender Rhodes and additional electronica. Dick de Graaf's quartet is another  group that is doing well, the album Moving Target is one result of that. Jeroen van Vliet composes for his groups, for modern dance, e.g. Hans Teurlings, Conny Janssen and for the internationally acclaimed Theatergroep Tuig.