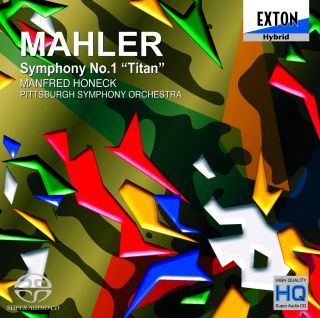 Catalog number: EXCL 00026
Releasedate: 30-10-09
This is the recording from inaugural concerts of Mr.Manfred Honeck as the Music Director of Pittsburgh Symphony Orchestra. The disc has enjoyed sensational success first in Japanese market, especially after getting numerous splendid reviews, both for the audio and artistic quality which were achieved after sheer "perfectionist" elaboration by the conductor, musicians and recording crew.
Pittsburgh Symphony Orchestra

Mahler's Titan Symphony is in essence very much like Mahler's later symphonies. It has a classical structure on the whole but the instrumentation is more daring.
Titan is referring to the book with the same name by the German writer Jean Paul.
Many passages of this wonderful symphony are have quite a spiritual atmosphere. The outburst of despair in the fourth part is very deep and severe and touches the heart directly.This is the recording from inaugural concerts of Mr.Manfred Honeck as the Music Director of Pittsburgh Symphony Orchestra. The disc has enjoyed sensational success first in Japanese market, especially after getting numerous splendid reviews, both for the audio and artistic quality which were achieved after sheer "perfectionist" elaboration by the conductor, musicians and recording crew.

Manfred Honeck was born in Austria and studied music at the Academy of Music in Vienna. An accomplished violinist and violist, he spent more than ten years as a member of the Vienna Philharmonic and the Vienna State Opera Orchestra. It is this experience that heavily influenced his conducting and helped give it a distinctive stamp.

Manfred Honeck commenced his career as conductor of Vienna's Jeunesse Orchestra, which he co-founded, and as assistant to Claudio Abbado at the Gustav Mahler Youth Orchestra in Vienna. Subsequently, he was engaged by the Zurich Opera House, where he was bestowed the prestigious European Conductor’s Award in 1993. In 1997, he assumed the post of Music Director at the Norwegian National Opera in Oslo for a year.

In 1996 Manfred Honeck began a three-year stint as one of three main conductors of the MDR Symphony Orchestra Leipzig.  A highly successful tour of Europe with the Oslo Philharmonic marked the beginning of a close collaboration with this orchestra which consequently appointed him Principal Guest Conductor, a post he held for several years. From 2000 to 2006 he was Music Director of the Swedish Radio Symphony Orchestra Stuttgart. In 2007 Manfred Honeck assumed his post as Music Director of the Staatsoper Stuttgart. Since September 2008 he has been serving as Principal Guest Conductor of the Czech Philharmonic Orchestra in Prague. After several highly successful guest appearances leading the Pittsburgh Symphony Orchestra, he was appointed its ninth Music Director, a position he took up at the start of the 2008/2009 season.

As a guest conductor Manfred Honeck has worked with major international orchestras such as the BR Symphony Orchestra, Deutsches Symphonie-Orchester Berlin, Gewandhausorchester Leipzig, Sächsische Staatskapelle Dresden, Royal Concertgebouw Orchestra, London Philharmonic Orchestra, Orchestre Philharmonique de Radio France, Czech Philharmonic and the Vienna Philharmonic as well as the Chicago Symphony Orchestra, Los Angeles Philharmonic, National Symphony Orchestra Washington, and Boston Symphony Orchestra in the USA.
Operatic engagements have led him to the Semperoper in Dresden, Komische Oper Berlin, Théâtre de la Monnaie in Brussels and Royal Opera of Copenhagen. He conducted Mozarts Così fan tutte at the White Nights Festival in St. Petersburg and at the Salzburg Festival. He also chose this work for his first, very successful, appearance in Stuttgart; his performances in his first season as General Music Director there included premieres of Berlioz's Les Troyens and Mozart's Idomeneo. In July 2009 he conducted a concert performance of Mozart's Don Giovanni  with a stellar cast at the Verbier Festival.
In the season 2009/2010 Manfred Honeck's main focus is on his obligatons in Stuttgart, Prague and Pittsburgh. In Stuttgart, he conducts premieres of Rosenkavalier and Parsifal and four symphony concerts of the Staatsorchester Stuttgart. In his programs, he continues to champion wrongly neglected composers such as Walter Braunfels and also is dedicated to music of today and the recent past.  Several performances with the Czech Philharmonic will take place in Prague.
In Pittsburgh, a gala concert will mark the beginning of the new season. Manfred Honeck will continue his multi-year Mahler cycle – performances of the first two symphonies were a tremendous success – with concerts of the 3rd Symphony. The new "Beethoven Project", a series of concerts of all of Beethoven's symphonies and concertos, will be launched in September 2009. A special highlight will be two tours to Europe in September 2009 and May 2010 which will lead to various musical capitals including Paris and Vienna. Two CDs (Strauss's Heldenleben and Mahler's First Symphony) are available on the Japanese label Octavia.
Apart from his numerous tasks as conductor, Manfred Honeck has been Artistic Director of the "International Concerts Wolfegg" in Germany for more than fifteen years.