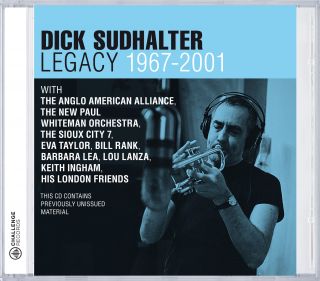 Catalog number: CR 73298
Releasedate: 04-06-10
"Richard M. Sudhalter gave elegance and exactness to speech, writing and music-making."- Doug Ramsey of Rifftides wrote this after Sudhalter passed away and the musical aspect of his trade is made perfectly clear on this extraordinary nostalgic and historically important CD.
Intense and full of spirit, this CD with the legacy of Dick Sudhalter, between the years 1967-2001.

"I had already met Dick Sudhalter and Henry Francis at Alan Leat’s little jazz club in the Old Brompton Road and been impressed by Henry’s stride pianistics and Dick’s Bixian sound, so when Laurie Wright, editor of “Storyville” magazine, rang me and suggested that I should get a band together to welcome the two to London at a gig that he would arrange at an East End pub called The Lord Rookwood I was nothing loth and promptly contacted my friend and EMI colleague Nevil Skrimshire, he of the rock-steady swinging guitar. Together we rounded up John R.T. Davies, Keith Nichols and Alan Cooper and from these informal beginnings a band was born." - Chris Ellis in the linernotes of the CD Dick Sudhalter - Legacy 1967-2001 and it gives a bit of a clue what can be found on this beautiful and very nostalgic CD!

“Was it the players, each a vivid, one of character with dimensions
extending quite beyond the here-and-now of music-making? Was it their feeling for history, cross-fertilizing a record collector’s curiosity with the expansive, share-the-wealth magnanimousness of the professional  jazzmen? Or was it nothing more or less than the sense of camaraderie radiating from them as they bade me welcome? Damned if I know. But it felt good, and still does. We met to rehearse, to argue, drink innumerable cups of muddy tea (the milk goes in first, Dad!), every Tuesday evening. The music we made had lift, humour, lightness of spirit. Above all, joy”. Dick Sudhalter

Tracks 1 to 14 are previously unissued, except tracks 4 and 5,
which were issued only as semi-private limited editions by John R.T. Davies.


Richard Merrill Sudhalter, musician and writer, Born 28th December, 1938, Boston, Mass, Died 19th September, 2008, New York. Son of Al Sudhalter, a leading alto saxophonist of the 1920s, he was brought up in a household where the likes of Bobby Hackett, Phil Napoleon and many other Jazzmen were frequent visitors. First instrument was piano but by the age of 12, having heard Paul Whiteman’s record of “San” featuring Bix Beiderbecke, he had switched to cornet and was soon playing around Boston with the likes of classmates Roger Kellaway and Steve Kuhn. Graduated from Oberlin College in 1960 with degrees in music and English. Worked in Austria teaching English and playing jazz on the side before becoming a reporter for United Press International. Was their European correspondent from 1964 to 1972 based at various times in Berlin, London and Belgrade. During his time in London he met many British Jazzmen including the members of the group that became the Anglo-American Alliance and who were later to form the core of the New Paul Whiteman Orchestra. Made his first records with the AAA. Divided his career between playing and writing. As a musician worked with many top combos including those of Vince Giordano and, notably, The Classic Jazz Quartet and The New York Repertory Company. As a writer wrote dozens of articles, liner notes (shared a Grammy Award with John Chilton in 1982 for their notes to a Bunny Berigan CD), was jazz critic for the New York Post for 10 years or so. Above all, 3 major books, “Bix, Man and Legend”
(1974), still regarded as a landmark in jazz biography, “Stardust-Melody” (2002) a superbly written biography of songwriter/pianist/singer Hoagy Carmichael; his masterpieces the controversial “Lost Chords - White Musicians and Their Contribution to Jazz” (1999), for which he faced accusations of racism, but only from people who had not read the book. He was anything but racist.

In 2003 he suffered a stroke, partially recovered, but sadly not long after began to show symptoms of Multiple System Atrophy, an incurable degenerative disease which slowly robbed him of all his physical functions. To those who loved and admired him his death came as a happy release.