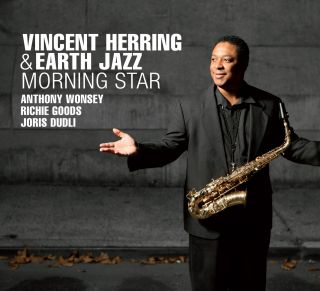 Catalog number: CR 73297
Releasedate: 01-02-10
Earth Jazz represents Herring’s electric funk-jazz connection. And while most jazz fans may know him from his tenure with hard bop icon Nat Adderley (1987-1993) or from his various sideman roles with the likes of Freddie Hubbard, Cedar Walton, the Mingus Big Band or Louis Hayes’ Cannonball Legacy Band (as well as from his 14 recordings as a leader), they will no doubt recognize him in this new and different setting.
Vincent Herring & Earth Jazz  | Vincent Herring: saxophone  | Joris Dudli: drums  | Anthony Wonsey: piano | Richie Goods: bass.

After performing live for five years now, the members of Earth Jazz have developed a very distinct sound that draws on their collective experiences. “And on this recording we tried to get the same vibe in the studio that we get live on gigs,” explains Goods. “That’s why some of the songs are kind of long because everybody blows. This is no smooth jazz group, everybody in this band solos, and we blow like we’re playing a bebop set even though it’s in a funky setting.” With Dudli and Goods acting as the lock down Mike Clark-Paul Jackson rhythm tandem of this Earth Jazz quartet, they strike a nice balance between slamming grooves and freewheeling improvisation on Goods’ “Citizen of Zamunda,” Dudli’s energized “Tom Tom” and Wonsey’s savvy backbeat fueled Earth Jazz treatment of John Coltrane’s “Naima.” Herring soars majestically on soprano sax on Wonsey’s vibrant rhapsody “Black Fairytales” and demonstrates soulful restraint and lyricism on alto on his own reflective “Never Forget.” Grant’s “Morning Star” has Dudli swinging briskly with brushes beneath Herring’s relaxed, pungent alto tones, Wonsey’s chiming Fender Rhodes electric piano and Goods’ contrapuntal basslines. And the emotionally-charged closer, Dudli’s gospel flavored “You Got Soul,” has Herring testifying on alto sax alongside Wonsey’s churchy piano comping and Goods’ warm, woody upright bass lines.

Vincent has developed into a virtuoso with a voice that is uniquely intense and vigorous with energy and direction. He is considered one of the premier saxophonists of his generation.

Vincent first toured Europe and the United States with Lionel Hampton’s big band in the early 1980’s. As he developed his musicianship he began to work with Nat Adderley a liaison that continued for nine years. Along the way he worked and / or recorded with Cedar Walton, Freddie Hubbard, Dizzy Gillespie, Louis Hayes, Art Blakey and The Jazz Messengers, Horace Silver Quintet, Jack DeJohnette’s Special Edition, Larry Coryell, Steve Turre, The Mingus Big Band, Kenny Barron, Nancy Wilson, Dr. Billy Taylor, Carla Bley, and John Hicks. Other special concert and projects have included special guest soloist engagements with Wynton Marsalis at Lincoln Center. Vincent also appeared as a guest soloist at Carnegie Hall with John Faddis and The Carnegie Hall Big Band.
While amassing these impressive credentials, Vincent continues to develop his own voice and style. In addition to the legends and peers he has worked with Vincent is inspired by a collage of diverse musical influences. Which is reflected in his original band called Earth Jazz Agents.
Vincent is also involved in Jazz education. He is currently on staff at William Patterson University as well as conducting master classes and jazz workshops at Juilliard. Vincent has also conducted master classes on jazz improvising at Duke and Cornell Universities.

Vincent has recorded 15 CD’s as a leader and can be heard on over 200 as a sideman.