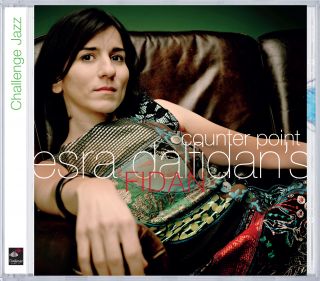 Esra Dalfidan begins her musical education at the early age of four. After five years of basic musical training she starts taking guitar lessons which inspire her to explore new horizons in classical music in addition to her singing. During this time she wins 1st prices at the renowhed German competition “Jugend  musiziert” and extensively tours and records with  the “LJZ Orchestra”. After graduating from school she complets her degree in music therapy at the “Fachhochschule Heidelberg” (Germany) in 1998. Esra begins  working as a music therapist in neurological rehabilitation and starts parallel to that taking lessons in the field of jazz. During this time she switches her focus from guitar to vocals. In 2001 Esra commences her studies at the “Conservatory of Amsterdam” with a.o. Lydia van Dam,  Sylvie Lane, Eileen Fiss, Debora Brown, Edwin Rutten, Ronald Douglas and finishes with her Master degree in 2007 with honours.
Esra concentrates on composing her own pieces and formed her group, “Fidan”: a group, which is serving as a platform for her to find the right concept and constellation to realize her own musical ambitions. With her group and own repertoire she wins  In Febr. 2007 the 1st price of the Dutch Jazz Competition for vocalists.