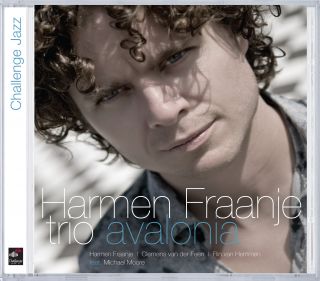 Harmen Fraanje writes in the linernotes: "At her first birthday, we gave my niece Luna a music set that had a xylophone, castanets, a glockenspiel and a little drum. She was absolutely fascinated with the sounds we let her hear from the various instruments. Naturally, she then tried them out for herself, testing each one. By then, I should say, I was beating on the drum myself as though my life depended on it.  It became an intense, pleasure-filled musical experience, our faces showing laughter and surprise, there were squeals of delight and even dancing on all fours – that done by my niece, mind you. It was as though we were driven to act as we did at the moment. During that mini-concert with my 1-year-old niece, my pleasure in music-making was no less complete than it has been in many of the concerts I’ve played in together with my favorite musicians. There was so much embracing of the moment, so much contact, so much expression, so much sincere surprise. Increasingly, I am beginning to realize that it is precisely these things that are for me the most important aspects of music, perhaps even of life in general."

Pianist Harmen Fraanje was born in 1976 in Roosendaal (The Netherlands).
The last ten years he lived in Tilburg, recently he moved to Amsterdam.

Harmen is very active in the international jazz scene, playing in some of Hollands' most succesfull groups, with some of the finest musicians in Europe.
He's developed an authentic voice, a very honest personal approach towards music.
He's an artist on a tireless quest for creativity, new collaborations and new horizons; open for all kinds of music, from classical music, to improvisation, from centuries-old Pygmy chants to Duke Ellington with John Coltrane, he's always trying to embody the music to be able to speak in his own unique language. The warm responses from audiences all over the world prove that Harmen's music speaks to many

In 2006 Harmen has been nominated for the Paul Ackett Award, formerly known as the Bird Award; the most important jazz award in the Netherlands, granted by the North Sea Jazz Festival.

His ability to easily find inspiration in the music he comes in contact with, makes it inevitable to participate in numerous groups, without exception groups he really enjoys to be part of.