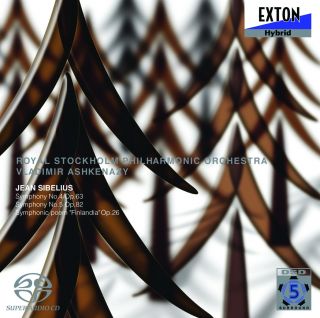 Catalog number: OVCL 282
Releasedate: 29-01-10
Ashkenazy is one of those very few conductors who really seem to understand Sibelius' work so totally. The sound of his interpretations of the symphonies 4 & 5, have real grandeur but never become too heavy. There is always a sort of 'breathing' in it, so that the works are utterly human, vivid, and deeply emotional.

Sublime interpretations by Sibelius-specialist Ashkenazy (72 years this year) and the Royal Stockholm Phil. of the Symphonies Nos.4 & 5 and Symphonic poem "Finlandia". Ashkenazy is one of those very few conductors who really seem to understand Sibelius' work so totally. The sound of his interpretations of the symphonies 4 & 5, have real grandeur but never become too heavy. There is always a sort of 'breathing' in it, so that the works are utterly human, vivid, and deeply emotional.
Recorded (Session & Live) in 2007 in The Stockholm Concert Hall (Stockholms Konserthus)
Hybrid (CD SACD 2ch/5.0ch)
Conducting forms the largest part of Ashkenazy's work for the last 20 years