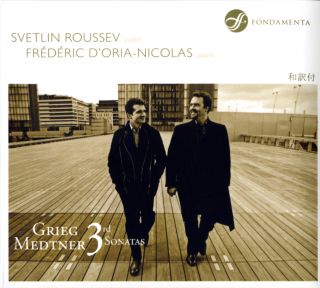 This fascinating recording brings two contrasting composers together, linked by their 3rd violin and piano sonatas. Grieg’s third and final violin sonata was finished in January 1887, dedicated to the German painter Franz Lenbach. Medtner’s 3rd sonata was also his last one and this was dedicated to his brother Emil, completed in 1938 and premiered the following year at the Aeolian Hall, London by the violinist Arthur Catterall and Medtner himself at the piano

Roussev has won numerous prizes at many international competitions, including those of Indianapolis, Long-Thibaud and Melbourne. He was voted Revelation of the Year in 2000 by the ADAMI organisation at the Midem, the French music industry’s major annual event in Cannes, and was selected for sponsorship by the Natexis-Banques Populaires Corporate Foundation. In May 2001, he was widely acclaimed at the first Sendai International Competition in Japan, which garnered him not only the first prize, but also the audience prize and the special prize for the best Bach concerto performance.

With remarkable virtuosity and intensity, Roussev performs a broad repertoire ranging from the baroque to the contemporary. He is renowned for his renditions of Slavic compositions and keenly promotes Bulgarian music. Acclaimed Bulgarian Musician of the Year in 2006, his home country honoured him yet again in 2007 with the Cristal Lyra distinction awarded by the Ministry of Culture.

Following his successful CD recording of pieces by Pancho Vladigerov with the pianist Elena Rozanova, Roussev brought out his recording of Karl Amadeus Hartmann’s Concerto Funèbre with the Orchestre d’Auvergne conducted by Arie Van Beek,recordings for French labels Integral and Fondamenta dedicated to the Franco-Belgian school of violin with pianist Elena Rozanova, and sonatas by Grieg and Medtner with pianist Frédéric D’Oria-Nicolas.