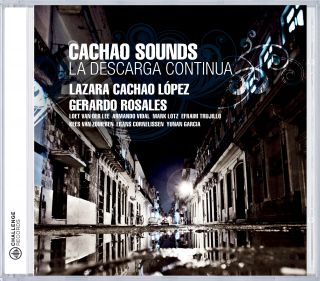 Cachao Sounds is a tribute to the Lopez Cachao family: Israel López
Cachao, Orestes López and Orlando López Cachaito. In 1937, the Brothers Orestes and Israel López composed the theme Mambo, a musical piece that would give the name to a new Cuban musical style. It was a much more rapid variation of the Danzon. With this composition the two Brothers created a genre that would be popularized in the late 1940’s by the Cuban pianist Dámaso Pérez Prado.

In the 50’s, Israel López “Cachao”, an energetic and creative man, went on
with his musical activities, this time directed towards jazz and the African
rhythms. Out of this fusion and of the night sessions played together with
Cuban musicians in a recording Studio, came numerous recordings and
also emerged the well-known “descargas”, improvisations in the style of
the jazz jam sessions.

Orlando Lopez “Cachaíto”, from his side, continued the family tradition
and executed wonderful musical works together with Los Amigos, a group
of Frank Emilio, Tata Guines and Guillermo Barreto. He also worked with
Estrellas Areito and was the founder of Buena Vista Social Club.

All Latin musicians learned the language of the rhythm and improvisation
from the discs recorded by Cachao and from his descargas of the 50’s. La descarga is a genre that gives the freedom to improvise, an indispensable
element in the development of the Latin jazz and la salsa.

In this wonderful album Cachao Sounds take part: Loet van der Lee,
Frans Cornelissen, Efraín Trujillo, Mark Lotz, Kees van Zomeren, Armando
Vidal, Yunan García, all of them important figures of the Dutch Jazz
circuit. Special mention deserves the participation, in this project, of
Lázara Cachao López, daughter of Orlando López Cachaíto. Lázara
Cachao inherited from her family the taste and wisdom to keep alive
the Cachao music. I brought together these artists to tell the world that
Gerardo Rosales doesn’t stop to defend the Latin music. Yes, Sir, the
descarga continues." Gerardo Rosales in the linernotes of the cd Cachao Sounds

Gerardo Rosales was born the 6th of July in Caracas, Venezuela.
Since 1993 he is living in Europe. At the age of 8 he started studying the piano. At the same time he is interested in playing the congas and bongo.
In 1977, at the age of 13, he gets to know Orlando Poleo, who invites him to study Afro Caribbean percussion at the "Taller de Arte" In the suburb Sarria in his native town Caracas. From 1977 till 1980 he studies congas and bongo with Orlando Poleo and timbales with Alberto Borregales.
In 1985 he studies Afro Venezuelan percussion with Alexander Livinali at the "Fundación Bigott".

In 1987 he starts making his career with important figures like Soledad Bravo, Cecilia Todd, Canelita Medina, Alberto Naranjo y el Trabuco Venezolano, Maria Rivas, Joe Ruiz, Ilan Chester, Orquesta Café, trina Medina y Yarake, Victor Cuica and many more. At the same time he founds his own orquestra named "Salsa 70" and with this band he is performing in all the suburbs, theaters and dance halls of the capital.

In 1992 he is invited to participate in the Expo Sevilla in Spain with the band "Caracas Son 7". From this moment he decides to stay in Europe.

With his concerts and recordings he has managed to spread and project the rhythms of Venezuela, Cuba, Puerto Rico, Colombia, Peru, Curacao, Surinam.

Lazara Cachao is the daughter of Cachaito, the legendary bass player of the  Buena Vista Social Club and she ispianist in the bands Oshun and Fuego de Salsa from Cuba. Coming of a very musical family with top musicians from Cuba (her grandfather Orestes Lopez was the inventor of the mambo) she is an very gifted musician.