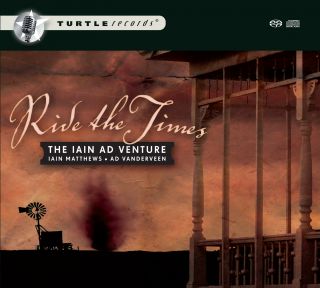 This record is sweet on the ear: the two voices are similar but clearly  different, one track flows into the next, each one a improves with repetition and it doesn’t seem to matter whether the song is a cover or an original. Some, like prescient Mohammed’s Radio or Tom Waits’ classic Heart of Saturday Night, you’ve obviously heard before, but so manu others sound as if you have. In the end, it doesn’t matter. You’re in the safe hands of two confident craftsmen, their talents and having a good time.

I don’t know Ad Vanderveen, but Iain has been surprising me ever since
I first saw him standing in front of a curtain at the Cromwellian Club in
London in 1967 with his group Pyramid, while the backing band remained
hidden behind it. I can’t say what has been the most surprising thing I’ve
learned about him over the years: that ‘he was a good enough football
player to get a trial run with ‘Bradford Park Avenue football club’ before
becoming a singer? That after he left Fairport Convention he had the
gigantic folk-rock hit single his former mates never managed? That he
moved to the music mecca of Austin, Texas and wrote songs worthy of the
best his new home had to offer? That he dropped singing for a while and
became an A&R man? That he moved to the Netherlands? That he wrote a
great song about my boyhood cowboy hero Randolph Scott and recorded it
beautifully with a jazz band?

After so many surprises, perhaps Iain’s latest Ad-Venture doesn’t astonish
– but Vanderveen does! What an excellent singer and songwriter! The Dutch
have always been good at absorbing alien cultures and out-doing them at
their own game (like Boulevard of Broken Dreams and the American bigband
torch song). His songs and his singing carve their own niche in the
canon of American song. Maybe you have to stand a little way outside it to
see it so clearly.

This record is warm and clear, relaxed and stimulating, satisfying and yes,
surprising. And it finds its way regularly on to my sound system.
Joe Boyd in the linernotes of Ride the Times

In 1967 Ian Matthews became a founder member of the British folk rock band, Fairport Convention, staying with the group for almost 2 years.

In order to facilitate and develop his growing fascination with American singer/songwriters, in 1969 he formed his own band, Matthews Southern Comfort, This group spawned a massive European hit with the Joni Mitchell song "Woodstock". However, within a year, Matthews felt restricted and began his solo career, signing with the Vertigo label and a new era began. After 2 albums for the company, once again, he felt the need for newer pastures and in 1972 Plainsong, a quartet, was formed with friend Andy Roberts, where together and to high critical acclaim, they chronicled the exploits of American aviator, Amelia Earhart.

Within a year Matthews was again on the move, this time changing continents in a move to Los Angeles, where he established an artist, producer relationship with ex Monkee, Michael Nesmith.

Intending to make the one album, stay for a year and return to Britain, Matthews eventually became a US resident, staying for the next 28 years. Along the way, recording a further 15 solo albums, plus several more with Plainsong and a couple with former Pavlov's Dog founder, David Surkamp, in the short lived Hi-Fi.

In 2000 he returned to Europe and for the next 4 years worked closely with Dutch singer/songwriter, Ad Vanderveen and together with Eliza Gilkyson, they formed the trio More Than a song, recording and releasing 2 albums.

Ad Vanderveen has earned a reputation as one of the best singer/songwriters in the new folk and roots genre. Although born a Dutchman (Hilversum, 1956), half his family are Canadian and it's this part of the world his musical roots can be traced to.

Since the days before it was called Americana Ad has been exploring his songwriting muse through a mixture of rock ‘n' roll, folk and country, working in many bands before finding his own voice as a solo artist in the early 90s.

His music covers a wide range of styles, from intimate acoustic songs as a solo performer with singer and companion Kersten de Ligny to expressive and extensive electric improvisation with his garage band The O'Neils, as well as everything inbetween.

Over the years Ad has built up an impressive catalog of 16 solo CDs and numerous side projects, working with many great musicians all over the world such as: Al Kooper, Al Perkins, Leland Sklar, Herman Brood, Flaco Jimenez, Iain Matthews, Eliza Gilkyson, Eric Andersen, David Olney, to drop a few names.

Ad Vanderveen 's live and record performances have garnered him high praise from critics as well as from a long list of renowned colleagues. His excellent reputation as a singer/songwriter and performer is spreading, both in the old world and the new.