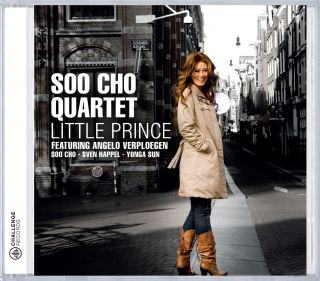 Catalog number: CR 73299
Releasedate: 01-10-10
Antoine de Saint-Exupéry’s book 'The Little Prince'. This was an important book for composer/pianist Soo Cho. The book's honest and poignant message she understood. Now this book is her inspiration to go back for a little while to our childhood: where things were not complicated and everything was possible! An album with pure and uncomplex music!
"I love to make my music as pure as possible and I also love to give an honest impression to the listener. These days a lot of musicians are making very complex and difficult music, which (although much of it is great music that I genuinely admire) I sometimes feel has something of the circus about it. Maybe this comes from my inability to play like that, but musical acrobatics have never spoken to me and I have always felt I should take a different approach - one which doesn’t emphasise technical prowess, but rather, focuses on serving the compositions and my ideas behind them.

We were all children once though, and we shouldn’t forget what that was like. Sometimes we should again think the way we did when we were children and see all the wonderful things in life that were once the only things we saw.

During the creation this album, I often took myself back to my childhood - where everything and anything seemed possible. I hope this comes across in my music and that it can make some people happy. I hope it will make people think about the things that inspired me when writing each composition."  - Soo Cho in the linernotes of the CD 'Little Prince'


Soo  Cho (South Korea) has been playing  piano almost all her life. She took classical lessons since when  she was 3 years old. Later Soo studied classical piano and flute at the Sung Sin University in  Seoul and followed courses in   music history, music philosophy, music pedagogics and many other subjects. After her studies she played piano in hotels around town, but also was professionally involved in the music  business. But music kept pulling and  after she discovered jazz, she decided to  move to Holland and really study  the music she loved.


When Soo arrived in Holland in 2001 she studied at the Utrecht conservatory with Bert van den Brink. After one year she moved to study at the more internationally orientated conservatory  in  Amsterdam, where she studied with Karel Boehlee, Rob van Bavel and Kris Goessens.

Soo has been writing her own songs over the last years and has formed her own trio with which she is playing quite regularly. She lead the jam sessions  at the Jazz club in Dordrecht for two years and organized her own monthly concerts at Baseline Theatre.

In the season 05/06 and 06/07, she has been invited to do a series of concerts at the DJS Jazzpodium in Dordrecht for  which she invited many great soloists from Holland and Belgium. The trio is starting to branch out and starts to play quite regularly.

In March 2008, her 1st  debut album 'PRAYER' was released by Challenge  Records.