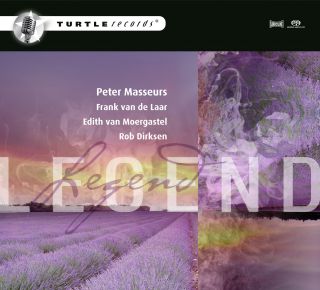 Catalog number: TR 75537
Releasedate: 29-10-10
Peter Masseurs was himself a legend in the orchestral world. From 1969 he was a member of the Rotterdam Philharmonic Orchestra, but Bernard Haitink and the Concertgebouw Orchestra wanted Masseurs. And after 12 1/2 years Amsterdam was so lucky to get this much sought after trumpetplayer. Now, he has reached the age of 65 and his career in the famous orchestra is over. But not his musical career as a whole, because Masseurs joins up with friends for this extraordinary CD!
It has always been my fondest dream to record the Second Sonatine by André Jolivet on CD once again but then with a trio. It definitely gives it a well-defined swing and in my view, this does the piece much greater justice. The two bridging pieces, Sonatine by Bohuslav Martinu and Legend by Georges Enescu, are well-known pieces from the repertoire for trumpet and piano.
The viola solo is a tribute to Pieter van Moergastel. It creates a lovely tranquillity on this CD. To my knowledge, the Duet for Viola and Trumpet by Jan Koetsier has never before been released on CD. Blending with the viola is a challenge. I was once honoured to perform the Sonatine by Jean Françaix with the composer himself, for which I am grateful and for which I give him this tribute.
And then, at the end a little surprise!? (from the linernotes of 'Legend- Peter Masseurs' by Peter Masseurs)

Peter grew up in a parish house in Halsteren, the Netherlands, not far from the Belgian border and Antwerpen. This is where his best memories lie, and they are clearly the basis for his further life. During these years he saw a film that made a huge impression on him because the background was played by Miles Davis. The result: in that parish house, Peter would spend hours with his trumpet in a large room with great acoustics. And preferably with the window open – often a neighbour would be sitting on a bench somewhere and enjoying the music too.

His urge to improvise gave way in the past to his enormous devotion to the orchestra and to his many solo performances there. Now that he is sixtyfive, he must let go of this dedication with pain in his heart. It means the loss of a familiar structure, of the concert stage, where his sound left such a strong mark, both in the orchestra and solo. It is no easy matter to let go of the concert stage when you have played such an important role on it. Now and then a memory of that time of improvisation floats to the surface. The freedom of your own time, the freedom of your own timing; in short, freedom.I know few people so intense and with such a strong constitution as Peter Masseurs. He has my deepest respect and, I am certain, that of many others with me. We hope to encounter him again on many concert stages! (from the linernotes of 'Legend- Peter Masseurs' written by Edith van Moergastel)


Peter Masseurs studied at the Academy of Music in Antwerp and entered the Royal Marines Navy Band before finishing his study. After his six year contract, he became trumpet solo of the Rotterdam Philharmonic Orchestra. He was a frequent soloist with the Rotterdam Philharmonic Orchestra and was member of the Netherlands brass ensemble besides the ‘regular’ concert programmes of the Orchestra. Peter was invited to be solo trumpeter of the Royal Concertgebouw Orchestra and appeared with this orchestra, as well as several others in the Netherlands, frequently as soloist. And last but not least, he has been a member of the Netherlands Wind Ensemble, Schönberg - ASKO Ensemble, Viotta Ensemble and the Ebony band.
(source: www.procustom.yamaha-europe.com)