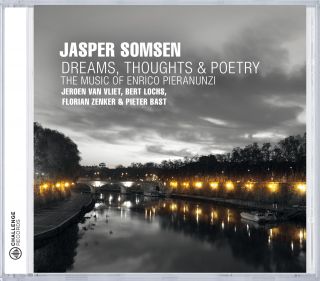 Catalog number: CR 73303
Releasedate: 01-10-10
An inspirational ode to a world famous pianist: Enrico Pieranunzi. Played by young, talented musicians who have a vision and who are totally inspired by the music and by playing together to give the existing music a new face. Played in admiration.
Jasper Somsen and his ensemble play the music of Enrico Pieranunzi and they do this with their own vision of Pieranunzi's music in a heartfelt and profoundly musical way. The interpretations and improvisations succeed beautifully in conveying the “dreams” and “thoughts” ánd "poetry".

Jasper Somsen: "When the music is really great, styles doesn't matter. Most important is that the music (whether improvised or composed) is straight from the heart!"

"The best music is created the moment you're truly listening and anticipating, during the interaction with your fellow musicians. If you do exactly the same whilst playing your solo(s), you get the best out of yourself. You're focused outward. Your concentration is centred 'in between' the phrases. This space is 'the silence' between the one right phrase and the (yet to be played) next right phrase. It's the ultimate spot where music is breathing; where inspiration, intuition, knowledge and technique show you the right musical path to be taken." (Jasper Somsen, inspired by Kenny Werner's book "Effortless Mastery")

Jasper Somsen was born on March 4 1973, Bennekom - The Netherlands. He studied Jazz and Classic double bass at the Conservatories of Utrecht, Hilversum and Amsterdam  in the Netherlands.

Jasper was the leader/producer/composer/arranger of the New Standard Trio, which released two CDs in 2003 ("Footsteps") and 2006 ("Nightshift Thunder"). As a sideman he played on several CDs.

The latest release is the CD "Mouthpieces" (2007) with the Dutch trumpet player Bert Lochs and the German guitarist Florian Zenker. The Trio Bert Lochs was invited to play at the North Sea Jazz Festival 2008, Rotterdam (NL). Also he is the bassplayer in the quartet of saxofonist Willem Hellbreker, feat. pianist Rob van Kreeveld.

Since 2001 he is the regular bassist with Maud Nelissen's The Sprockets and her Orchestra da Camera Oscura, playing live music with silent movies. Both ensembles played at many national en international festivals in Holland, Belgium, Italy and Germany.

As a (guest)teacher he was appointed at the Conservatories of Amsterdam, Rotterdam, Utrecht and Alkmaar. Currently Jasper runs his own Bass Academy in his home town, Wageningen - The Netherlands.